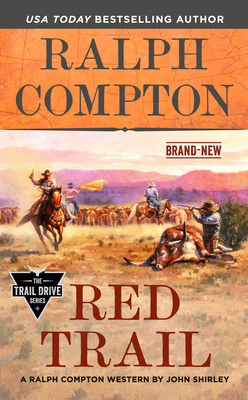 An outbreak of hostilities with Comanches has disrupted the usual trail routes. But Mase Durst must get his cows from his Texas ranch to the railway up in Wichita, Kansas, or face losing his land, which the bank is fixing to foreclose on. He's forced to take his herd on a little-used route called the Red Trail—little used for good reasons. It’s a tough trek: dangerous, narrow, and fraught with banditry.

Along the way, Durst and his men face numerous obstacles thrown up by Mother Nature, cattle rustlers and crooked lawmen. But even their safe arrival in Wichita will offer no relief if he can’t make it home in time to save his ranch from the bank—and his wife from the predations of their rapacious neighbor. . .

Ralph Compton stood six foot eight without his boots. He worked as a musician, a radio announcer, a songwriter, and a newspaper columnist. His first novel, The Goodnight Trail, was a finalist for the Western Writers of America Medicine Pipe Bearer Award for best debut novel. He was the USA Today bestselling author of the Trail of the Gunfighter series, the Border Empire series, the Sundown Riders series, and the Trail Drive series, among others.

John Shirley was born in Houston and now lives in Vancouver, Washington. He is the author of numerous novels and books of short stories, and won the Bram Stoker Award for his collection Black Butterflies. His novels include the Specialist books (under the name John Cutter), The Brigade, Bleak History, the A Song Called Youth trilogy, and a novel of Wyatt Earp as a young lawman, Wyatt in Wichita. He has also written television, movies, and songs.
Loading...
or support indie stores by buying on