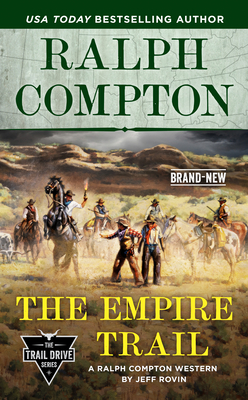 In this thrilling installment in bestseller Ralph Compton’s Trail Drive series, a small ranch owner drives his herd into Mexico and is startled to find that human life comes cheaper than beef on the hoof.

Andrew Buchanan has a problem. His modest ranch in Southern California is being pressured by an unscrupulous competitor and the encroaching wave of the future—orange growers. The only chance he has to sell his cattle for real money is to take them south into Mexico.

The Empire Trail is five hundred miles of misery that crosses scorching deserts and clings to treacherous cliffs—and it's Andrew's job to find the best way across. But physical barriers are not the only thing he must contend with. A group of dangerous men are trailing the herd, determined to take the cattle or die trying.

But this is Andrew's livelihood that hangs in the balance, and he won't go down without a fight.

Ralph Compton stood six foot eight without his boots. He worked as a musician, a radio announcer, a songwriter, and a newspaper columnist. His first novel, The Goodnight Trail, was a finalist for the Western Writers of America Medicine Pipe Bearer Award for best debut novel. He was the USA Today bestselling author of the Trail of the Gunfighter series, the Border Empire series, the Sundown Rider series, and the Trail Drive series, among others.
Loading...
or support indie stores by buying on