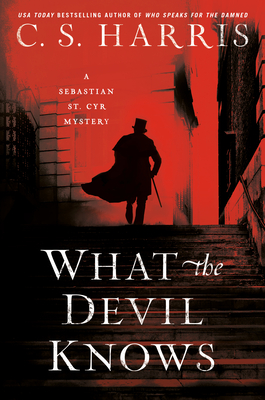 Sebastian St. Cyr thought a notorious killer had been brought to justice until a shocking series of gruesome new murders stuns the city in this thrilling historical mystery from the USA Today bestselling author of Who Speaks for the Damned.

It's October 1814. The war with France is finally over and Europe's diplomats are convening in Vienna for a conference that will put their world back together. With peace finally at hand, London suddenly finds itself in the grip of a series of heinous murders eerily similar to the Ratcliffe Highway murders of three years before.

In 1811, two entire families were viciously murdered in their homes. A suspect--a young seaman named John Williams--was arrested. But before he could be brought to trial, Williams hanged himself in his cell. The murders ceased, and London slowly began to breathe easier. But when the lead investigator, Sir Edwin Pym, is killed in the same brutal way three years later and others possibly connected to the original case meet violent ends, the city is paralyzed with terror once more.

Was the wrong man arrested for the murders? Bow Street magistrate Sir Henry Lovejoy turns to his friend Sebastian St. Cyr, Viscount Devlin, for assistance. Pym's colleagues are convinced his manner of death is a coincidence, but Sebastian has his doubts. The more he looks into the three-year-old murders, the more certain he becomes that the hapless John Williams was not the real killer. Which begs the question--who was and why are they dead set on killing again?

Praise For What the Devil Knows (Sebastian St. Cyr Mystery #16)…

Praise for What the Devil Knows

"What the Devil Knows shows C.S. Harris at her best. Tightly plotted, fast-paced and based on historical events, the 16th entry in the Sebastian St. Cyr series brings the seamy side of Regency life to light.”--Shelf Awareness

“An intricate puzzle, based on a series of real-life murders, that indicts social injustices that continue to this day.”--Kirkus

“Excellent…Harris makes good use of the available evidence concerning the historical crimes, crafting a clever and suspenseful plot. Fans of David Morrell’s Murder as a Fine Art will be pleased.”--Publishers Weekly, Starred Review

“As readers try to guess the identity of the killer, they will enjoy the ride through the many levels of Regency English society this case involves.”--Booklist