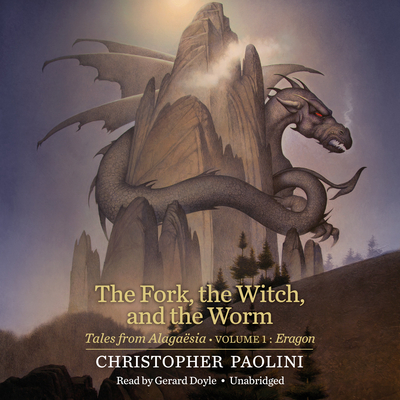 The Fork, the Witch, and the Worm

The internationally bestselling fantasy sensation is back, with brand-new stories set in the world of Eragon and the Inheritance Cycle!

A wanderer and a cursed child. Spells and magic. And dragons, of course. Welcome back to the world of Alagaësia.

It's been a year since Eragon departed Alagaësia in search of the perfect home to train a new generation of Dragon Riders. Now he is struggling with an endless sea of tasks: constructing a vast dragonhold, wrangling with suppliers, guarding dragon eggs, and dealing with belligerent Urgals and haughty elves. Then a vision from the Eldunarí, unexpected visitors, and an exciting Urgal legend offer a much-needed distraction and a new perspective.

This volume features three original stories set in Alagaësia, interspersed with scenes from Eragon's own unfolding adventure. Included is an excerpt from the memoir of the unforgettable witch and fortune-teller Angela the herbalist . . . penned by Angela Paolini, the inspiration for the character, herself!

Relish the incomparable imagination of Christopher Paolini in this thrilling new collection of stories based in the world of the Inheritance Cycle.

Praise For The Fork, the Witch, and the Worm: Tales from Alagaësia (Volume 1: Eragon)…

"Paolini is a spellbinding fantasy writer." —The Boston Globe

"A breathtaking and unheard of success." —USA Today

“Will appeal to legions of readers who have been captivated by the Lord of the Rings trilogy.”—School Library Journal

Christopher Paolini was born in 1983 in Southern California. His abiding love of fantasy inspired him to write the Inheritance Cycle, which quickly became an internationally bestselling series. Christopher wrote the first draft of the introductory book in the series, Eragon, at age 15. Christopher draws inspiration for the world of Eragon and his dragon, Saphira, from the natural beauty that surrounds his home in Montana: the tumultuous weather, the roaring Yellowstone River, and the soaring Beartooth Mountains. Find out more about Christopher and the Inheritance Cycle at Alagaesia.com.

Gerard Doyle was born of Irish parents and raised and educated in England. His career in British repertory theater includes The Crucible, Playboy of the Western World, The Tempest, The Importance of Being Earnest, Someone Who’ll Watch Over Me, Treasure Island, Fiddler on the Roof, and Brecht’s Baal. In London’s West End, he appeared in the gritty musical The Hired Man and toured internationally with the English Shakespeare Company in Corialanus, The Winter’s Tale, Macbeth, and Twelfth Night. His television career in the UK includes Blott on the Landscape, The Bill, The Knock, 2point4 Children, The Brittas Empire, and Brass Eye. In America he has appeared on Broadway in The Weir and on television in New York Undercover and Law & Order, as well as a number of commercials on network TV. He is an award-winning narrator of some 400 audiobooks. He enjoys singing and playing traditional Irish music on tin whistle and bodhran. He lives with his wife and two children in Sag Harbor, New York.
Loading...
or
Not Currently Available for Direct Purchase