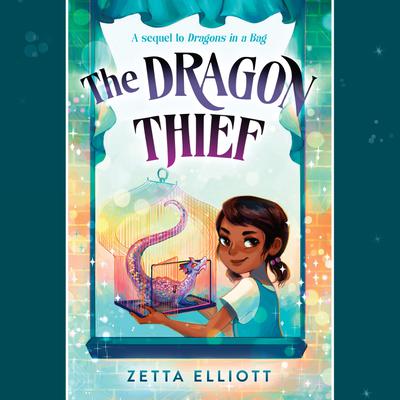 The Dragon Thief (Dragons in a Bag) (Digital Audiobook)

Stealing a baby dragon was easy! Hiding it is a little more complicated, in this second book in the critically acclaimed Dragons in a Bag series.

Jaxon had just one job--to return three baby dragons to the realm of magic. But when he got there, only two dragons were left in the bag. His best friend's sister, Kavita, is a dragon thief!

Kavita only wanted what was best for the baby dragon. But now every time she feeds it, the dragon grows and grows! How can she possibly keep it secret? Even worse, stealing it has upset the balance between the worlds. The gates to the other realm have shut tight! Jaxon needs all the help he can get to find Kavita, outsmart a trickster named Blue, and return the baby dragon to its true home.

The Dragons in a Bag series continues! Coming in Spring 2022, don't miss The Witch's Apprentice.

Zetta Elliott was born in Canada and moved to the United States in 1994. Her poetry has been published in several anthologies, and her plays have been staged in New York and Chicago. Her essays have appeared in the Huffington Post, School Library Journal, and Publishers Weekly. She is the author of over twenty-five books for young readers, including the award-winning picture books Bird and Melena's Jubilee. She is also a contributor to We Rise, We Resist, We Raise Our Voices, published by Crown Books for Young Readers. Elliott is an advocate for greater diversity and equity in publishing. A longtime resident of Brooklyn, she currently lives in Philadelphia. Learn more at zettaelliott.com.