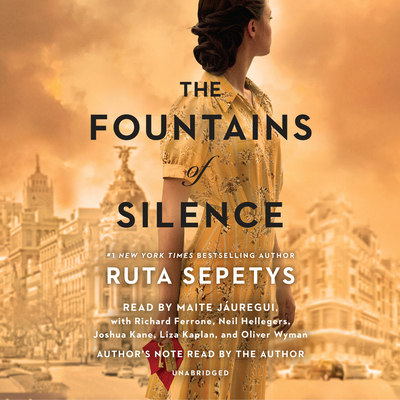 
Read by Maite Jáuregui, with Richard Ferrone, Neil Hellegers, Joshua Kane, Liza Kaplan, and Oliver Wyman, and with an Author’s Note read by the author

RUTA SEPETYS (www.rutasepetys.com) is an internationally acclaimed author of historical fiction published in over sixty countries and forty languages. Sepetys is considered a "crossover" novelist as her books are read by both teens and adults worldwide. Her novels Between Shades of Gray, Out of the Easy, and Salt to the Sea are all New York Times bestsellers, international bestsellers, and Carnegie Medal nominees. Her books have won or been shortlisted for over forty book prizes, are included on over sixty state award lists, and are currently in development for film. Born and raised in Michigan, Ruta now lives with her family in Nashville, Tennessee. Follow her on Twitter @RutaSepetys.
Loading...
or
Not Currently Available for Direct Purchase