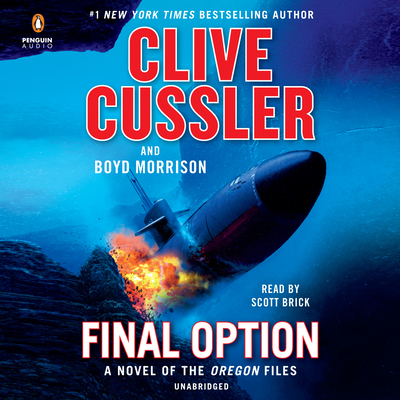 In Final Option, Juan Cabrillo fights the worst enemy from his past to the terrifying and unexpected ending created by the Grand Master of Adventure, Clive Cussler, in the latest action-packed thriller in his #1 New York Times-bestselling series.

When the CIA realizes the identities of three American spies in Brazil have been compromised, they turn to Juan Cabrillo and the crew of the Oregon to rescue the agents. What seems a routine operation turns out to be a trap designed by Juan Cabrillo's greatest enemy, a man driven by hate to seek the ultimate revenge. At the heart of the plot is a state-of-the-art ship that is identical to the Oregon: same weaponry, same technology, same ability to evade capture. The only thing it doesn't have is Cabrillo and his talented crew. But will they be enough to go up against the one ship that rivals their own?

The crew of the Oregon must piece together a series of disturbing events, including the mysterious sinking of a nuclear attack submarine and the possible discovery of a WWII-era weapon that was thought to be lost in the jungles of Brazil, in the ultimate game of cat and mouse.

"An all-out nonstop action thriller. . . Boyd Morrison has taken this Clive Cussler series to new heights, and Final Option is the best one yet. The story hits the gas pedal and never taps the brakes.”--Associated Press

"Startling. . . The intense, riveting climax takes the Oregon where the ship has never been before. Series fans won’t want to miss this one.”--Publishers Weekly

Clive Cussler is the author or coauthor of more than seventy previous books in five best-selling series, including Dirk Pitt, NUMA Files, Oregon Files, Isaac Bell, and Sam and Remi Fargo. His life nearly parallels that of his hero Dirk Pitt. Whether searching for lost aircraft or leading expeditions to find famous shipwrecks, he and his NUMA crew of volunteers have discovered more than seventy-five lost ships of historic significance, including the long-lost Confederate submarine Hunley, which was raised in 2000 with much press publicity. Like Pitt, Cussler collects classic automobiles. His collection features more than eighty examples of custom coachwork. Cussler lives in Arizona.