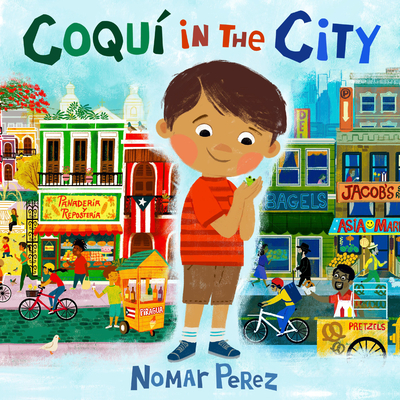 Coquí in the City

A heartfelt picture book based on the author-illustrator's own experiences, about a boy who moves to the U.S. mainland from Puerto Rico and realizes that New York City might have more in common with San Juan than he initially thought.

Miguel's pet frog, Coquí, is always with him: as he greets his neighbors in San Juan, buys quesitos from the panadería, and listens to his abuelo's story about meeting baseball legend Roberto Clemente. Then Miguel learns that he and his parents are moving to the U.S. mainland, which means leaving his beloved grandparents, home in Puerto Rico, and even Coquí behind. Life in New York City is overwhelming, with unfamiliar buildings, foods, and people. But when he and Mamá go exploring, they find a few familiar sights that remind them of home, and Miguel realizes there might be a way to keep a little bit of Puerto Rico with him--including the love he has for Coquí--wherever he goes.

Praise For Coquí in the City…

“Perez draws upon his own childhood experience of moving from Puerto Rico to Ohio, capturing the emotional experience of moving, adjusting, and remembering one’s culture and origins. Bright, bustling cartoon illustrations offer readers plenty to look at as they take in the two distinct cities alongside Miguel.”—Booklist

“The happy and positive message that not all new beginnings are to be feared is a welcome one.”—Kirkus Reviews

Nomar Perez was born on the beautiful island of Puerto Rico, in the city of Ponce, and moved with his parents and five siblings to Ohio when he was ten. Nomar is heavily influenced by all types of media, most especially animation, puppetry, and computer art. He studied computer animation and painting at Bowling Green State University in Ohio, and since then has worked as an illustrator on social expression products in the categories of humor, children's, and young adult. Nomar has also illustrated numerous children's board books and school publishing books. Coquí in the City is his author-illustrator debut.
Loading...
or support indie stores by buying on