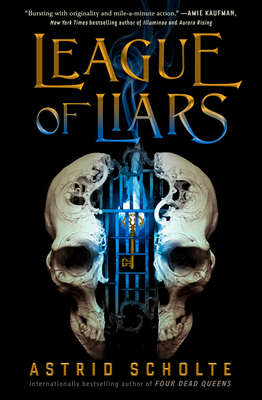 In this fantasy thriller, four teens charged with murder and caught up with the illegal use of magic band together to devise the ultimate jailbreak. Now in paperback.

In the city of Kardelle, anyone can call forth magic but with consequences that are often catastrophic, even deadly, the use of edem—extradimensional magic—is outlawed. No one knows this better than seventeen-year-old Cayder Broduck, who once succumbed to edem’s lure himself. Now Cayder is on the straight and narrow, and his dream is to become a prosecutor to ensure edem abusers are punished to the fullest extent of the law.

To learn how best to prosecute them, Cayder takes an apprenticeship under a renowned defense attorney so he can understand the tricks of public defense. But when he arrives at Vardean prison, built at the heart of a tear in dimensions from where all magic comes, things aren't so black and white. The criminals he’s meant to defend are teenagers like him, and their stories are complicated. Cayder hadn’t expected to be affected by their stories or to question a justice system he once thought had saved him. And he definitely never expected to plot the ultimate jailbreak, risking everything to free them. But, too late, he realizes no one is who they seem to be and everyone is guilty of something.

Praise For League of Liars…

Praise for League of Liars:

An Amazon Best Book of the Month – February 2022

“The plot is twisty in satisfying ways . . . [and with] romances, one steamy and one cozy, a fabulous setting, and complex, nuanced characters—what else could one want for a winter night’s reading?” —The Bulletin of the Center for Children's Books

“Scholte’s third novel is a mash-up fantasy/legal drama/heist story. . . The worldbuilding [is] interesting . . . [and will] keep readers wondering what will happen next and find out who—or what—is behind these murders.” —School Library Journal

“Scholte's latest tells a story filled with adventure, magic, and mystery, transporting readers to a whole new world filled with a magic system that incorporates the concept of shadows being dangerous and magical. The twists and turns will keep readers engaged.” —Booklist

“Blends legal thriller and action novel in an exploration of morality’s gray areas . . . a mix of first- and third-person perspectives lend depth to the cast.” —Publisher’s Weekly

“League of Liars has everything you want in your next favorite thriller, from razor-sharp pacing to unforgettable characters and of course, the fresh and immersive world building you’ve come to know and love from Astrid Scholte. Don’t miss this twisty, heart-pounding fantasy!” —Sarah Glenn Marsh, author of the Reign of the Fallen series

“Full of dark intrigue and a thrilling mystery that will ensnare you until the end, League of Liars is everything I love in a story. From its phenomenal crew of misfits you can’t help but root for, to its immersive and enchanting world building, Scholte’s latest will have you savoring every page.” —Adalyn Grace, New York Times bestselling author of All the Stars and Teeth

“This riveting YA thriller . . . is among the most exciting stuff being put out in the genre right now.” —Entertainment Weekly

Astrid Scholte was raised on a diet of Spielberg, Lucas and Disney, and knew she wanted to be surrounded by all things fantastical from a young age. She’s spent the last fourteen years working in film, animation and television as both an artist and a manager. Career highlights include working on James Cameron’s Avatar, Steven Spielberg’s The Adventures of Tintin and Disney’s Moon Girl and Devil Dinosaur. She lives in Melbourne, Australia, with her fiancé and two cats, Lilo and Mickey.
Loading...
or
Not Currently Available for Direct Purchase