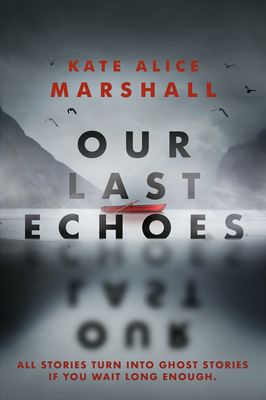 Kara Thomas meets Twin Peaks in this supernatural thriller about one girl's hunt for the truth about her mother's disappearance.

In 1973, the thirty-one residents of Bitter Rock disappeared. In 2003, so did my mother. Now, I've come to Bitter Rock to find out what happened to her--and to me. Because Bitter Rock has many ghosts. And I might be one of them.

Sophia's earliest memory is of drowning. She remembers the darkness of the water and the briny taste as it filled her throat, the sensation of going under. She remembers hands pulling her back to safety, but that memory is impossible--she's never been to the ocean.

But then Sophia gets a mysterious call about an island names Bitter Rock, and learns that she and her mother were there fifteen years ago--and her mother never returned. The hunt for answers lures her to Bitter Rock, but the more she uncovers, the clearer it is that her mother is just one in a chain of disappearances.

People have been vanishing from Bitter Rock for decades, leaving only their ghostly echoes behind. Sophia is the only one who can break the cycle--or risk becoming nothing more than another echo haunting the island.

Praise For Our Last Echoes…

Raves for Our Last Echoes:

"Fantastically immersive... Beautifully haunting and sure to keep readers up all night."—Kirkus

"A disturbingly imaginative tale that is both deeply human and truly terrifying."—Publishers Weekly

“Told in a series of prose chapters mixed with found documents and written confessions, this offers teen readers an engrossing journey that will appeal to fans of body horror and supernatural thrillers.”—Booklist

Praise for Rules for Vanishing:

Raves for I Am Still Alive:

"This tense wire of a novel thrums with suspense.... [This book] just might be the highlight of your summer."-The New York Times

* "With masterful pacing, rich characterization, a dynamic voice, and a thrilling blend of wilderness survival and revenge, this is an engrossing read from a writer to watch."-Booklist, starred review

Kate Alice Marshall started writing before she could hold a pen properly, and never stopped. She lives in the Pacific Northwest with a chaotic menagerie of pets and family members, and ventures out in the summer to kayak and camp along Puget Sound. She is the author of the young adult novels I Am Still Alive and Rules for Vanishing, as well as the middle grade novels Thirteens and Brackenbeast. Visit her online at katemarshallbooks.com.
Loading...
or support indie stores by buying on