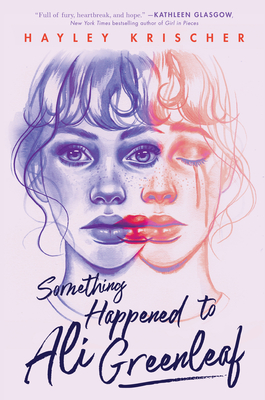 Something Happened to Ali Greenleaf

"Ali Greenleaf's story is complex and beautifully told; full of fury, heartbreak, and hope." --Kathleen Glasgow, New York Times bestselling author of Girl in Pieces and How to Make Friends With the Dark

Ali is sweet, bitingly funny, and just a little naive. Blythe is beautiful, terrifying, and the most popular girl in school. They've never even talked to each other, until a party when Ali decides she'll finally make her move on Sean Nessel, her longtime crush and the soccer team's superstar. But Sean pushes Ali farther than she wants to go. When she resists--he rapes her.

Blythe sees Ali when she runs from the party, everyone sees her. And Blythe knows something happened with Sean; she knows how he treats girls. Even so, she's his best friend, his confidant. When he tells her it was a misunderstanding, she decides to help him make things right.

So Blythe befriends Ali, bringing her into a circle of ruthless popular girls, and sharing her own dark secrets. Despite the betrayal at the heart of their relationship, they see each other, in a way no one ever has before.

In her searing, empowering debut novel, Hayley Krischer tells the story of what happened that night, and how it shaped Ali and Blythe forever. Both girls are survivors in their own ways, and while their friendship might not be built to last, it's one that empowers each of them to find justice on their own terms.

Praise For Something Happened to Ali Greenleaf…

"Whether or not Sean is punished for his crime becomes less important than the powerful voices these unlikely allies end up granting each other." —The New York Times

"Hayley Krischer’s debut novel is a crucial read in the #MeToo era." —Paste

"A relentless expression of survival, facets of pain and how we carry and inflict violence toward ourselves and against each other. Daring in its complexity. A powerful debut." —Courtney Summers, New York Times bestselling author of Sadie

“A powerful, nuanced, and stunning debut about rape culture and survival that will haunt you long after you close the book. Ali Greenleaf's story is complex and beautifully told; full of fury, heartbreak, and hope.” —Kathleen Glasgow, New York Times bestselling author of Girl in Pieces and How to Make Friends With the Dark

“Necessary and timely, Something Happened to Ali Greenleaf takes us on a journey that is at once heartbreaking and heart-healing, as Hayley Krischer’s unique, refreshing voice skillfully navigates the realities of sexual assault with care, insight, and authenticity. Full of truth, hope, and empowerment, this story is one you’ll be thinking about long after you’ve finished.” —Amber Smith, New York Times bestselling author of The Way I Used to Be

“Something Happened to Ali Greenleaf deftly examines the elaborate complexity of high school friendships, and confronts every possible shade of gray. A timely and intimate discussion of rape culture, the power of shared stories, the courage it takes to find your voice.” —Ashley Woodfolk, author of When You Were Everything

"Their friendship, flawed as it is, explores the many complexities of sexual assault and how it affects girls everywhere. . . . A powerful and important addition." —School Library Journal

"A realistically messy look at the power dynamics at play in a toxic school environment and into the shared painful experiences of Ali and Blythe . . . A harrowing read that tells a complicated story with nuance." —Kirkus Reviews

Hayley Krischer is a writer and journalist. She is a regular contributor to The New York Times, where she covers women, teenage girls, celebrities, and cultural trends. Her work has also appeared in Marie Claire, The Atlantic, The New York Times Magazine, and more. She lives in Glen Ridge, New Jersey, with her husband, two kids, one dog, and three cats.
Loading...
or
Not Currently Available for Direct Purchase