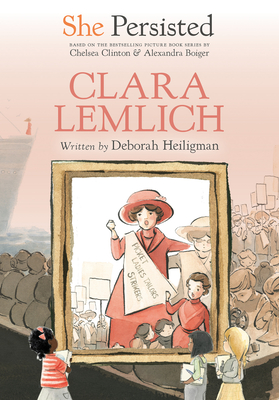 Inspired by the #1 New York Times bestseller She Persisted by Chelsea Clinton and Alexandra Boiger comes a chapter book series about women who stood up, spoke up and rose up against the odds--including Clara Lemlich In this chapter book biography by award-winning author Deborah Heiligman, readers learn about the amazing life of Clara Lemlich--and how she persisted. Clara Lemlich immigrated to New York to escape danger in Ukraine, where she was born. She started working in clothing factories on the Lower East Side, only to realize that workers were being treated unfairly. So she stood up for the rights of workers, especially girls and women--and she won, changing the way factory workers were treated in America forever Complete with an introduction from Chelsea Clinton, black-and-white illustrations throughout, and a list of ways that readers can follow in Clara Lemlich's footsteps and make a difference.

Deborah Heiligman (deborahheiligman.com) is the author of over thirty books, most of them nonfiction, including Torpedoed: The True Story of the World War II Sinking of The Children's Ship; Vincent and Theo: The Van Gogh Brothers; Charles and Emma: The Darwins' Leap of Faith; and The Boy Who Loved Math: The Improbable Life of Paul Erdos. Her books have won the SCBWI Golden Kite Award, the YALSA Excellence in Nonfiction Award, the Boston Globe-Horn Book Award for nonfiction, and an ALA Printz Honor, and they've been longlisted for the National Book Awards and been featured on the New York Times notable books list. She lives in New York City with her husband and their dog, Zuzu. Follow her on Twitter and Instagram @DHeiligman.Chelsea Clinton is the author of the #1 New York Times bestseller She Persisted: 13 American Women Who Changed the World; She Persisted Around the World: 13 Women Who Changed History; She Persisted in Sports: American Olympians Who Changed the Game; Don't Let Them Disappear: 12 Endangered Species Across the Globe; It's Your World: Get Informed, Get Inspired & Get Going!; Start Now!: You Can Make a Difference; with Hillary Clinton, Grandma's Gardens and Gutsy Women; and, with Devi Sridhar, Governing Global Health: Who Runs the World and Why? She is also the Vice Chair of the Clinton Foundation, where she works on many initiatives, including those that help empower the next generation of leaders. She lives in New York City with her husband, Marc, their children and their dog, Soren. You can follow Chelsea Clinton on Twitter @ChelseaClinton or on Facebook at facebook.com/chelseaclinton. Gillian Flint (gillianflint.com) is an illustrator who has a passion for painting in watercolors. She has been drawing and creating characters for as long as she can remember. Her work has been published in the USA, the UK and Australia. In her spare time she enjoys reading and gardening at her home in the UK. You can follow her on Instagram @gillianflint_illustration. Alexandra Boiger (alexandraboiger.com) has illustrated nearly twenty picture books, including the She Persisted series by by Chelsea Clinton; the popular Tallulah series by Marilyn Singer; and the Max and Marla books, which she also wrote. Originally from Munich, Germany, she now lives outside of San Francisco, California, with her husband, Andrea; daughter, Vanessa; and two cats, Luiso and Winter. You can follow Alexandra on Instagram @alexandra_boiger.
Loading...
or support indie stores by buying on