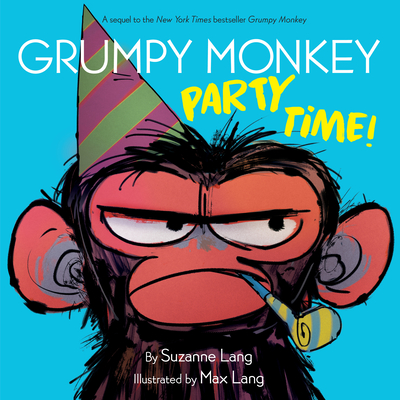 Everyone's favorite New York Times bestselling Grumpy Monkey is back in this hilarious sequel about managing social anxiety and listening to your needs!

Have you ever been a little anxious about going to a party? Jim Panzee feels that. Porcupine is having a big party, and according to Jim's best friend Norman, there will be--gulp--dancing. Jim can DEFINITELY not dance. When he tells his friends, they all try to teach him cool moves--surely that's the only reason Jim isn't excited about this party!

Now, their job complete, the other animals sweep Jim along, all the way to the dance floor. Jim is dipped, swayed, and twirled until he can't take it anymore--he just doesn't like to dance! When he lets everyone know, he's met with disbelief...until Water Buffalo reveals that he doesn't much care to dance, either. As more and more animals have the courage speak their truths, does this mean there's no place for them at this party?

In this hilarious sequel to GRUMPY MONKEY, kids will learn that it's okay not to go with the flow if they're uncomfortable, and that speaking up about what they need can help others speak up, too--and maybe they need the same thing!

"The emphasis changes from recognizing one’s own feelings to having the courage to express them."—Booklist

Suzanne Lang is the author of the New York Times bestselling Grumpy Monkey books as well as several other titles. When she’s not writing books, Suzanne writes for animation. When she’s not doing that, she hangs out with her very funny kids, feeds her many pets, and tries (but usually fails) to take a nap!

Max Lang has illustrated over 20 books including all of the books in the Grumpy Monkey series. When he is not making books he makes films. He has co-directed several animated films including The Snail and the Whale, Zog, Room on the Broom, and The Gruffalo. He has received a BAFTA, two Emmys, two Oscar nominations, and many other honors for his film work. In his spare time he tries to make his kids laugh with dad jokes, and when he inevitably fails, he takes his dogs for a walk.
Loading...
or support indie stores by buying on