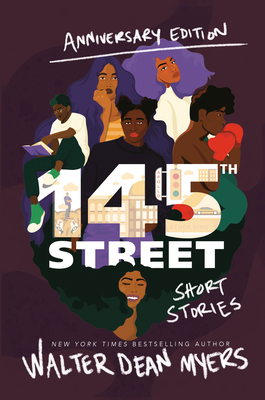 “Myers is a master.” —The New York Times Book Review

On Harlem’s 145th Street, things happen that don’t happen anywhere else in the world.

Get to know Big Joe, who’s throwing his own funeral while he’s here to enjoy it, and everyone’s invited. Meet Kitty and Mack, teens with a love story more real than anything they’ve ever known. Follow Monkeyman, the quietest kid on the block and the last person you’d expect the Tigros gang to target. And don’t miss the block party of the year—the whole neighborhood will be there.

This twentieth-anniversary edition of Myers’s work features brand-new content, including historical information about Harlem’s rich past, an immersive map of the neighborhood’s iconic landmarks, and touching tributes from authors, artists, and literary legends. Celebrating two decades in print, this edition honors Myers’s enormous legacy and brings his work to a new generation of readers.

"Myers has a great natural style . . . and is completely at home in a Harlem depicted without adulation but with great affection." —The Horn Book Magazine, Starred

"Readers will find that they could settle in for hours and take it all in." —Publishers Weekly, Starred

"Fast, wry, and honest . . . the search for personal identity is at the heart of this lyrical collection, and so is the sense of the place." —Booklist, Boxed

Walter Dean Myers was a poet, a novelist, a playwright, a musician, and an avid collector of memorabilia. He was awarded the American Library Association’s 2019 Children’s Literature Legacy Award, the inaugural Michael L. Printz Award for Excellence in Young Adult Literature, the inaugural Coretta Scott King–Virginia Hamilton Award for Lifetime Achievement, the Margaret A. Edwards Award, and the ALAN Award. His books for young adults have received numerous accolades, including two Newbery Honor Awards, eleven Coretta Scott King Author Awards and Honor Awards, and many more. 145th Street: Short Stories was a Boston Globe–Horn Book Honor Book and an ALA-YALSA Best Book for Young Adults and received starred reviews from the Horn Book and Publishers Weekly.
Loading...
or support indie stores by buying on