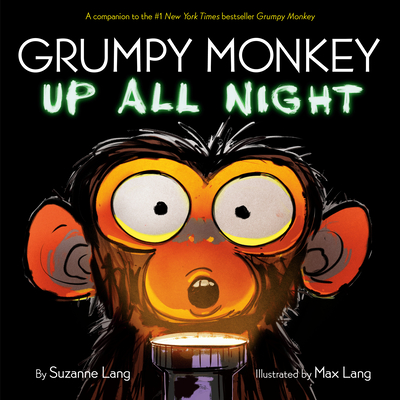 Grumpy Monkey Up All Night

Everyone's favorite New York Times bestselling Grumpy Monkey is back in this hilarious bedtime story about dealing with frustration when you don't get to do what you want!

Have you ever stayed up way past your bedtime? Jim Panzee certainly has. Jim is going to a slumber party and there's LOTS to do. Jim plans on bobbing for mangoes, going termite fishing, and of course staying UP ALL NIGHT!

But Jim gets more than a little frusrated when all the things he wanted to do go awry. One by one, everyone else falls asleep, while Jim is determined to stay up. How long will he last?

In this delightful follow up in the GRUMPY MONKEY series, kids see what happens when you stay awake too late!

MAX LANG is an animation director, storyboard artist, character designer, and illustrator. He codirected the adaptation of The Gruffalo, which was nominated for an Oscar and a BAFTA, as well as the adaptation of the picture book Room on the Broom, which has won numerous awards, including the Cristal for Best TV Production at this year's Annecy Animation Festival.
Loading...
or support indie stores by buying on