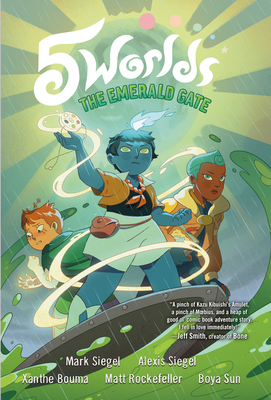 Oona and her friends face their ultimate challenge in the final installment of the graphic sci-fi fantasy series that's Star Wars meets Avatar: The Last Airbender!

In the epic conclusion to the 5 Worlds series, the final battle looms as Oona, Jax, and An Tzu travel to the treacherous world of Grimbo (E)! There, Oona must light the last beacon to save the 5 Worlds, but first she has to find it! When Jax saves an old friend, Oona is given a clue to the green beacon's location.

Unfortunately, the journey to lighting it on this strange, watery planet is the most dangerous yet. Meanwhile, Stan Moon has one more trick up his sleeve as his frightening powers and mysterious connection to An Tzu continue to grow. How can Oona ever hope to beat him? Can she count on her friends or will a terrible betrayal mean the 5 Worlds will be lost to evil forever?

MARK SIEGEL has written and illustrated several award-winning and bestselling picture books and graphic novels. He is also the founder and editorial director of First Second Books. He lives with his family in New York. Find Mark at marksiegelbooks.com and the 5 Worlds team on Twitter at @5WorldsTeam.

XANTHE BOUMA is an illustrator based in Los Angeles, California. Her work includes picture books, such as Little Sid, fashion illustration, and comics. Follow Xanthe on Tumblr at @yumbles and on Twitter at @xoxobouma.

MATT ROCKEFELLER is an illustrator and comic artist from Tucson, Arizona. Currently living in Portland, Oregon. His work includes book covers, animation, and picture books such as Train, Rocket, and Pop! Follow him on Tumblr at @mrockefeller and on Twitter at @mcrockefeller.

BOYA SUN is an illustrator and coauthor of the graphic novel Chasma Knights. Originally from China, Boya now lives in Los Angeles, California. Follow Boya on Tumblr at @boyasun and on Twitter at @boyaboyasun.
Loading...
or support indie stores by buying on