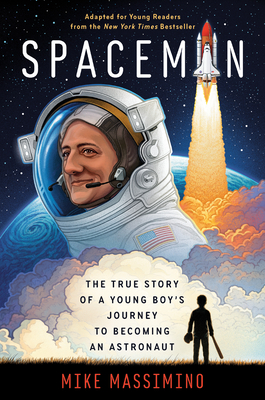 "Mike Massimino is a spaceman through and through. In this edition for young people, he tells us how hard work can take you out of this world. He believes in teamwork, and he never gives up. Prepare to be inspired." --BILL NYE, Science Guy and CEO, The Planetary Society

"From his childhood days peering up at the sky to his struggles to find his life’s calling, Massimino’s story will inspire many kids." –School Library Journal

"An inspirational guide for young people on their own life journeys.” –Booklist

MIKE MASSIMINO served as a NASA astronaut from 1996 to 2014. A veteran of two space flights to the Hubble Space Telescope, Mike and his crews set team records for spacewalking time, and he became the first person to tweet from space. He has played himself on the CBS sitcom The Big Bang Theory, was featured in the IMAX film Hubble 3D, and has appeared frequently in television documentaries and on late-night talk shows and news programs. A graduate of Columbia University and MIT, Mike lives in New York City, where he is a professor at Columbia and an advisor at the Intrepid Sea, Air & Space Museum. Visit him online at MikeMassimino.com and follow @Astro_Mike on Twitter and @astromikemassimino on Instagram.
Loading...
or
Not Currently Available for Direct Purchase