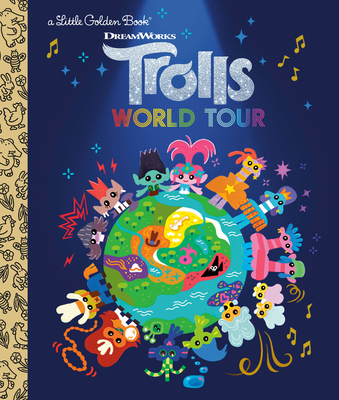 This all-new Little Golden Book is based on DreamWorks Trolls World Tour--available at home on demand April 10, 2020!

Trolls fans ages 2 to 5 will love this beautifully illustrated Little Golden Book, which is a complete retelling of DreamWorks Trolls World Tour! In the beginning, it's all glitter and happiness in Troll Village until Queen Poppy and Branch make a surprising discovery--there are other Troll worlds beyond their own, each defined by a different genre of music! When a mysterious threat puts all the Trolls across the land in danger, Poppy, Branch, and their band of friends must embark on an epic quest do the impossible: create harmony among the diverse Trolls to unite them against certain doom.

In 1942, the launch of Little Golden Books revolutionized children’s book publishing by making high-quality picture books available at affordable prices. More than 60 years later, many of the original Golden Book titles are still wildly popular, with The Poky Little Puppy topping the list of ten bestselling children’s books of all time. Golden Books’ backlist is teeming with classics such as Dorothy Kunhardt’s Pat the Bunny, and features the stories and artwork of children’s book legends Mary Blair, Margaret Wise Brown, Richard Scarry, Eloise Wilkins, Garth Williams, and many more. Today, the Golden Books imprint includes an array of storybooks, novelty books, and coloring and activity books featuring all of the most popular licenses, including Disney, Nickelodeon, Barbie, Thomas & Friends, The Cat in the Hat, Sesame Street, Marvel Super Heroes, and DC Super Friends. Golden Books continues to reissue the best of its backlist in a variety of formats, including ebooks and apps, as well as bringing out brand-new books in these evolving new formats.
Loading...
or support indie stores by buying on