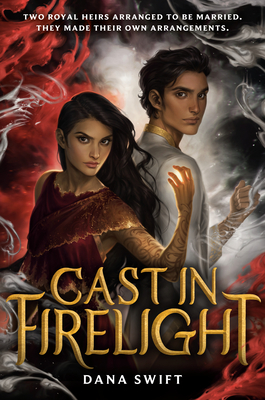 The first book in an epic, heart-pounding fantasy duology about two royal heirs betrothed to be married, but whose loyalties are torn, and a ruthless enemy who threatens their world, perfect for fans of Sabaa Tahir, Susan Dennard, and Mary E. Pearson.

Adraa is the royal heir of Belwar, a talented witch on the cusp of taking her royal ceremony test, and a girl who just wants to prove her worth to her people.

Jatin is the royal heir to Naupure, a competitive wizard who's mastered all nine colors of magic, and a boy anxious to return home for the first time since he was a child.

Together, their arranged marriage will unite two of Wickery's most powerful kingdoms. But after years of rivalry from afar, Adraa and Jatin only agree on one thing: their reunion will be anything but sweet.

Only, destiny has other plans and with the criminal underbelly of Belwar suddenly making a move for control, their paths cross...and neither realizes who the other is, adopting separate secret identities instead.

Between dodging deathly spells and keeping their true selves hidden, the pair must learn to put their trust in the other if either is to uncover the real threat. Now Wickery's fate is in the hands of rivals..? Fiancées..? Partners..? Whatever they are, it's complicated and bound for greatness or destruction.

Praise For Cast in Firelight (Wickery #1)…

“A fun, fast-paced fantasy saturated in wonder with a pair of dynamic heroes who will steal your heart. You won’t want it to end!”—KAYLYNN FLANDERS, author of Shielded

“An enchanting adventure full of fast-paced action and fantastic characters. Set in a richly imagined fantasy world, Cast in Firelight delights on every level.”—ROSEMARY CLEMENT-MOORE, author of Texas Gothic and Spirit and Dust

“I was hooked from beginning to end. The romance and adventure unfolded brilliantly, and the world and its characters swept me away. I enthusiastically recommend it!”—KATHRYN PURDIE, #1 New York Times bestselling author of Burning Glass and Bone Crier’s Moon

“Cast in Firelight sparks with quick humor and crystal prose, a vivid elemental magic system, a burning romance, and a heroine whose courage and wit light up the pages. A fantasy with a fresh voice equal-parts fun, romance, and action.”—AMELIE WEN ZHAO, author of the Blood Heir series

“Absorbing, perfectly plotted, and heartfelt, Cast in Firelight will have you turning pages and rooting for Dana Swift’s fierce, original heroine.”—LESLIE LUTZ, author of Fractured Tide

“A spell-binding debut with cage-fighting witches, vigilante heroism, and an intoxicating slow-burn romance. Fans of Serpent & Dove’s smart-alecky Lou and The Wrath and the Dawn’s cunning Sharhzard should prepare themselves to fall head over heels for the fiery Adraa.”—KELLY COON, author of the Gravedmaidens duology

“A satisfying romantic fantasy with a badass heroine and memorable setting….[Perfect for] fans of Susan Dennard and ­Roshani Chokshi.”—SLJ

Dana graduated from the University of Texas at Austin and is an active member of the DFW Writers' Workshop. She lives in Miami, Florida, with her husband. Cast in Firelight is her debut novel. To learn more about Dana and her books visit danaswiftbooks.com or follow @swift_dana on Twitter and Instagram.
Loading...
or
Not Currently Available for Direct Purchase