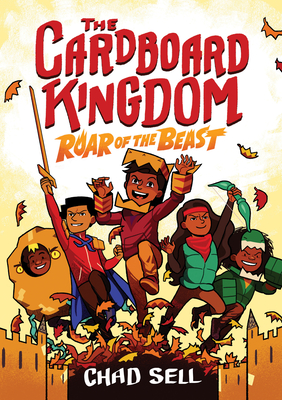 Roar of the Beast

Perfect for fans of Raina Telgemeier and All's Faire in Middle School, this sequel to the Eisner Award-nominated The Cardboard Kingdom follows the kids as they solve the mystery of a new neighborhood monster.

A mystery is afoot in the Cardboard Kingdom.

Vijay, the Beast, renounces his title after being bullied by neighborhood teenagers. No one--not his big sister Shikha or his friends--can seem to draw him back out of his shell.

That very night is when it starts. At first, no one believes Nate, who breaks his leg trying to pursue what he saw from his bedroom window. But then there's another, and another. An unknown monster has been spotted roaming the Kingdom after dark. It's ghastly, it's quick, and it might even have giant tentacles. Or claws. Or wings. Okay, there might be some varied testimonies on what exactly this monster looks like.

Forget Halloween--the newly minted Monster Mashers will go to any lengths to protect the Kingdom and uncover this mystery. But how did the monster get here? What does it want? And mostly importantly, who is behind its creation?

Praise For The Cardboard Kingdom #2: Roar of the Beast…

Chad Sell's first children's graphic novel was The Cardboard Kingdom, which he illustrated and co-wrote with a team of ten collaborators. This same team came together again to create The Cardboard Kingdom: Roar of the Beast. Chad's first full-length solo project, Doodleville, is set in Chicago, where he lives with his husband and two cats. @chadsell01
Loading...
or support indie stores by buying on