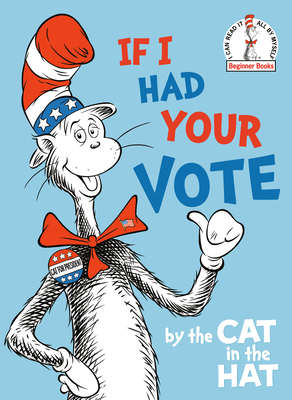 Just in time for Election Day, this hilarious new Beginner Book featuring Dr. Seuss's Cat in the Hat--and the changes he'd make if elected president of the United States--is perfect for introducing young readers to the White House!

Think politics is boring for kids? Think again! If the Cat in the Hat is elected president, life in the White House is about to get a lot more interesting--and funny! The Cat plans to shake things up. On his agenda: To change the shape of the Oval Office (to make it far more OVAL-ER-ER); to replant the Rose Garden with Seussian shrubbery; to paint smiles on portraits of frowning world leaders; and (among other things) to shoot a SOCK-IT rocket into space to shower the United States with an explosion of socks! Written in rhyme and featuring a cast of characters from The Cat in the Hat and The Cat in the Hat Comes Back, this is the perfect, kid-friendly way to introduce beginning readers to life in the White House AND to the Cat in the Hat.

Established in July 2013 in a merger between Penguin and Random House, Penguin Random House, with nearly 250 independent imprints and brands on five continents, more than 15,000 new titles published each year, and close to 800 million print, audio, and eBooks sold annually, is the world’s leading trade book publisher. Like its predecessor companies, Penguin Random House is committed to publishing adult and children’s fiction and nonfiction print editions and is a pioneer in digital publishing. Its publishing lists include more than 60 Nobel Prize laureates and hundreds of the world’s most widely read authors.

Tom Brannon is a popular illustrator who has worked on many different book series, including Sesame Street, Muppet Babies, and Playhouse Disney.
Loading...
or
Not Currently Available for Direct Purchase