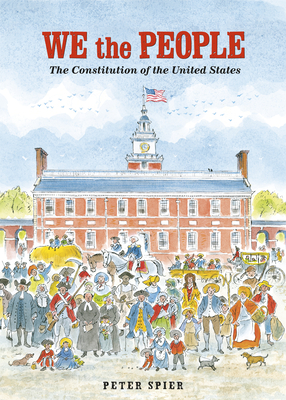 The Constitution of the United States

The US Constitution brought to life for young readers!

In this visual celebration of the US Constitution and America's founding fathers, Caldecott Medalist Peter Spier tells the stirring American tale of how this most important document came to symbolize freedom, justice, equality, and hope for all citizens. This fact-filled volume includes:
• The complete text of the Constitution
• An illustrated preamble to the Constitution, illuminating its signifcance from its birth through to modern times
• The fascinating history of the struggle to create and ratify the Constitution
• A historical reproduction of the original document

Full of illustrations that bring the Constitution to life, this is a must-have resource for every American school, library, and home.

★ “A joyful celebration of the people whose leaders created the Constitution.” —Booklist, starred review

“Spier has created a tribute that can be appreciated in more than one sitting.” —Publishers Weekly

Praise For We the People: The Constitution of the United States…

★ "A joyful celebration of the people whose leaders created the Constitution"—Booklist, starred review

“A celebration of America’s diversity”—Kirkus

“Spier has created a tribute that can be appreciated in more than one sitting.”—Publishers Weekly

PETER SPIER was one of America's most popular and renowned children's illustrators. His books, acclaimed by critics and readers alike, won numerous awards and honors: Noah's Ark won the Caldecott Medal and The Fox Went Out on a Chilly Night is a Caldecott Honor Book. His book People was nominated for an American Book Award and received the National Mass Media Award from the National Conference of Christians and Jews for “outstanding contributions to better human relations and the cause of brotherhood.″

Spier was born and educated in Amsterdam. Before coming to the United States, he served in the Royal Netherlands Navy. He illustrated dozens of books and was also an avid and celebrated builder of model ships. Peter Spier died in 2017 at the age of 89.
Loading...
or support indie stores by buying on