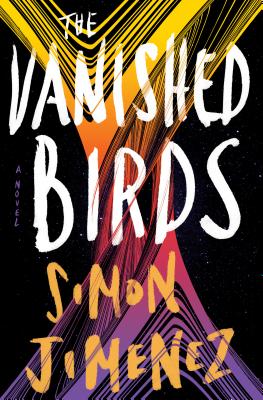 “This book has stuck with me in a way that I know can only be attributed to masterful storytelling. In The Vanished Birds, Earth becomes uninhabitable and humankind spreads out into space using technology that is all of our capitalist, designer-baby, smart-everything, social-media-age fears realized. But this new world is also beautifully poetic — enormous space stations have been designed to mimic specific birds but have outlived their namesakes for lifetimes. I am dizzied by this world Jimenez has created and the characters that live in it. I find myself thinking about Nia and the people in her orbit — their thoughts, their motives, their choices — and going over mistakes and minutiae as if they were my own. This is literary science fiction at its most effective and affective.”
— Samantha Tovey, Tattered Cover Book Store, Denver, CO
View the List

A “highly imaginative and utterly exhilarating” (Thrillist) debut that is “the best of what science fiction can be: a thought-provoking, heartrending story about the choices that define our lives” (Kirkus Reviews, starred review).

A mysterious child lands in the care of a solitary woman, changing both of their lives forever.

I expected many things from this trip. I did not expect a family.

A ship captain, unfettered from time. A mute child, burdened with unimaginable power. A millennia-old woman, haunted by lifetimes of mistakes. In this captivating debut of connection across space and time, these outsiders will find in each other the things they lack: a place of love and belonging. A safe haven. A new beginning.

But the past hungers for them, and when it catches up, it threatens to tear this makeshift family apart.

Praise for The Vanished Birds

“This is the most impressive debut of 2020.”—Locus

“This extraordinary science fiction epic, which delves deep into the perils of failing to learn from one’s mistakes, is perfect for fans of big ideas and intimate reflections.”—Publishers Weekly (starred review)

“The Vanished Birds finds an intimate heartbeat of longing in a saga of galactic progress and its crushing fallout. . . . A novel of vast scope that yet makes time for compassion, wonder, and poetry.”—Indra Das, author of The Devourers

Simon Jimenez’s short fiction has appeared in Canyon Voices and 100 Word Story’s anthology of flash fiction, Nothing Short Of. He received his MFA from Emerson College. This is his first novel.

Praise For The Vanished Birds: A Novel…

“Simon Jimenez’s touching, bold, surprising, gorgeous debut novel…is not only the best debut novel I’ve read in ages, but simply one of the best SF novels in recent memory.”—Locus

“If you enjoy science fiction with heart, if you love stories about stories, about people and the future and the things we do to keep making a future for each other, then read The Vanished Birds. You’re not going to want to miss this one, I promise.”—Tor.com

“The Vanished Birds is at its best when it’s most intimate, spinning a story filled with romance, much of it queer, along with platonic relationships that demonstrate the power of found families. An impressively ambitious debut novel.”—AV Club

“The future world-building is rich and smart, the prose assured, and the story both intensely personal and a blistering commentary on capitalism and colonialism. . . . Highly recommended.”—Kate Elliott, author of Black Wolves

“Reminiscent of Justin Cronin’s The Passage, yet the journey itself evokes Bryce Courtenay’s The Power of One, creating crossover appeal for readers who enjoy a bit of emotional attachment with their time travel . . .The story takes on a tone and depth that recalls an N.K. Jemisin novel.”—Library Journal

“This powerful, suspenseful story asks us to consider what we’d sacrifice for progress—or for the ones we love.”—Kirkus Reviews (starred review)

“The Vanished Birds strikes a breathless balance between the conceptually dazzling and the emotionally resonant, and it’s in that balance that a bright new voice in genre fiction is born. Simon Jimenez has announced himself as a graceful, spellbinding storyteller.”—BookPage (starred review)
or support indie stores by buying on
Copyright © 2020 American Booksellers Association