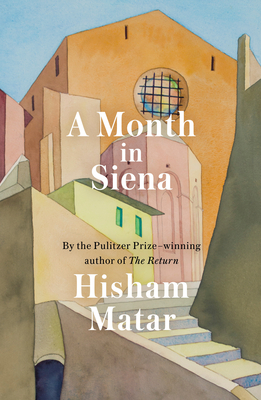 A Month in Siena

From the Pulitzer Prize–winning author of The Return comes a profoundly moving contemplation of the relationship between art and life.

After finishing his powerful memoir The Return, Hisham Matar, seeking solace and pleasure, traveled to Siena, Italy. Always finding comfort and clarity in great art, Matar immersed himself in eight significant works from the Sienese School of painting, which flourished from the thirteenth to the fifteenth centuries. Artists he had admired throughout his life, including Duccio and Ambrogio Lorenzetti, evoke earlier engagements he’d had with works by Caravaggio and Poussin, and the personal experiences that surrounded those moments.

Including beautiful full-color reproductions of the artworks, A Month in Siena is about what occurred between Matar, those paintings, and the city. That month would be an extraordinary period in the writer’s life: an exploration of how art can console and disturb in equal measure, as well as an intimate encounter with a city and its inhabitants. This is a gorgeous meditation on how centuries-old art can illuminate our own inner landscape—current relationships, long-lasting love, grief, intimacy, and solitude—and shed further light on the present world around us.

Praise for A Month in Siena

“As exquisitely structured as The Return, driven by desire, yearning, loss, illuminated by the kindness of strangers. A Month in Siena is a triumph.”—Peter Carey

Praise For A Month in Siena…

“As exquisitely structured as The Return, driven by desire, yearning, loss, illuminated by the kindness of strangers . . . A Month in Siena is a triumph.”—Peter Carey

“Exact and graceful . . . A Month in Siena gives us [Hisham] Matar turning his intense gaze on another landscape entirely. . . . It is arguing for the power of art to answer a longing to be ‘recognized,’ while bringing about the rediscovery of ‘our own powers of remembrance,’ a pastime that demands the closest possible attention.”—The New York Times Book Review

“Matar is a master of pellucid statement that seems simple yet is exactly right. . . . He is equally eloquent about the paintings he loves. . . . This is an exquisite, deeply affecting book, one in which an experience of dislocation and loss is conveyed in prose that flows so clearly and gracefully it finds continuities and connections all the time.”—Evening Standard

“A sweet, short mediation on art, grief, and life . . . A Month in Siena is a brilliant miniature, a fugue but also a release. Its intellectual and emotional depth is never forced, never exclusive. Concerning grief as much as art, it is a considered attempt to explain both, while allowing that nothing can be contained fully within a single book, painting, city, or life.”—The Arts Desk

“Through meditations on mortality, loss, government, cruelty, the Black Death, the inclusive camaraderie of the Palio and Siena’s marketplace, Matar shares moments of refreshing solitude.”—BBC

“[A Month in Siena] tells us much about the extraordinary power of art to inspire. . . . But this book is about so much more than the medieval art of Siena.”—Literary Review

“An exquisite reflection on the intersection of life and art.”—RTÉ

“A quiet meditation on art and life . . . [a] thoughtful, sensitive extended essay about [Matar’s] visit to Siena, where he ruminates and reflects on paintings, faith, love, and his wife, Diana . . . a beautifully written, pensive, and restorative memoir.”—Kirkus Reviews

Hisham Matar is the Pulitzer Prize–winning author of the memoir The Return, which also received the PEN/Jean Stein Award and other international prizes, and was selected as one of The New York Times’s Ten Best Books of the Year. His debut novel, In the Country of Men, was shortlisted for the Man Booker Prize and won several awards, including the Royal Society of Literature Ondaatje Prize and a Commonwealth First Book Award. His second novel, Anatomy of a Disappearance, was selected as one of the best books of the year by several publications, including the Chicago Tribune and The Guardian. He was elected as a Fellow of the Royal Society of Literature in 2013. Born in New York City to Libyan parents, he spent his childhood in Tripoli and Cairo and now divides his time between London and New York, where he teaches literature at Barnard College, Columbia University.
Loading...
or
Not Currently Available for Direct Purchase