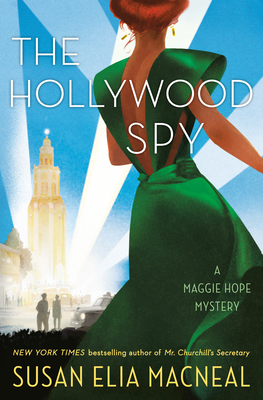 Maggie Hope is off to California to solve a crime that hits too close to home—and to confront the very evil she thought she had left behind in Europe—as the acclaimed World War II mystery series from New York Times bestselling author Susan Elia MacNeal continues.

“A swift, vibrant novel that peels back the asbestos curtain on the complex history of Los Angeles, home to heroes and villains.”—Steph Cha, author of Your House Will Pay

Los Angeles, 1943. As the Allies beat back the Nazis in the Mediterranean and the United States military slowly closes in on Tokyo, Walt Disney cranks out wartime propaganda and the Cocoanut Grove is alive with jazz and swing every night. But behind this sunny façade lies a darker reality. Up in the lush foothills of Hollywood, a woman floats lifeless in the pool of one of California’s trendiest hotels.

When American-born secret agent and British spy Maggie Hope learns that this woman was engaged to her former fiancée, John Sterling, and that he suspects her death was no accident, intuition tells her he’s right. Leaving London under siege is a lot to ask—but John was once the love of Maggie’s life . . . and she can’t say no.

Maggie struggles with seeing her lost love again, but more shocking is the realization that her country is as divided and convulsed with hatred as Europe. The Zoot Suit Riots loom large in Los Angeles, and the Ku Klux Klan casts a long shadow everywhere. But there is little time to dwell on memories once she starts digging into the case. As she traces a web of deception from the infamous Garden of Allah to the iconic Carthay Circle Theater, she discovers things aren’t always the way things appear in the movies—and the political situation in America is more complicated, and dangerous, than the newsreels would have them all believe.

Praise For The Hollywood Spy: A Maggie Hope Mystery…

“Maggie Hope and her adventures continue to be charming and absorbing.”—Seattle Times

“The 10th Maggie Hope historical mystery by Susan Elia MacNeal is a particularly distinctive one . . . MacNeal’s brisk plotting and efficient dialogue propel a mystery cloaked in some universal truths: History is determined to repeat itself, no front is ever united and Hollywood, despite its glamour and sparkle, is a hall of mirrors.”—The New York Times

“Stellar . . . Susan Elia MacNeal expertly braids the glitz and glamour of Hollywood with the chilling reality of the rise of American Nazis and blatant racism . . . Maggie notes that ‘it’s the same war, different country,’ and, sadly, one we’re still fighting.”—Arizona Daily Star

“Los Angeles is a cauldron of racism, riots, and the rise of American Nazism. Hope navigates all of it with compassion and valor.”—Milwaukee Journal Sentinel, “8 Thrilling New Mysteries for Summer 2021 Reading”

“The Hollywood Spy is a swift, vibrant novel that peels back the asbestos curtain on the complex history of Los Angeles, home to heroes and villains, including both homegrown Nazis and run-of-the-mill racists and segregationists during the volatile days of World War II.”—Steph Cha, author of Your House Will Pay

“Unbelievable timeliness in this gutsy, brilliant look at 1940s Southern California and its bygone ties to Hitler’s regime.”—L.A. Chandlar, author of the Art Deco Mystery series

“The Hollywood Spy is an absolute triumph. Maggie Hope is as irresistible a heroine as ever, and while she’s been to hell and back, her brilliance, empathy, and strength shine through in equal measure.”—Hilary Davidson, author of Her Last Breath

“The Hollywood Spy is a riveting plunge into the tainted paradise of wartime Hollywood, where surface glitter masks a bone-deep decay. This series only gets more complex and satisfying with each new entry.”—Francine Mathews, author of The Alibi Club

“Maggie Hope’s return to America brings her to Los Angeles, where a starlet’s death reveals a battle for the soul of the country. Fans of the buoyant Maggie Hope will relish this sun-drenched excursion.”—Lori Rader-Day, author of The Black Hour

“The Hollywood Spy is a juicy, delightful mystery that takes you straight into the glamour, drama, and dark intrigue of wartime Hollywood. It’s always a pleasure to follow Maggie Hope wherever she goes.”—Simone St. James, author of The Sun Down Motel

“In the tenth superbly crafted addition to her Maggie Hope series, MacNeal deftly captures both the dazzling side of 1943 California, with cameo appearances from Hollywood stars galore, and the dismaying aspects of the Golden State’s darker side . . . ”—Library Journal, starred review

Susan Elia MacNeal is the New York Times bestselling author of the Maggie Hope mysteries. MacNeal won the Barry Award and has been nominated for the Edgar, Macavity, Agatha, Left Coast Crime, Dilys, and ITW Thriller awards. She lives in Brooklyn, New York, with her husband and son. The Hollywood Spy is her tenth novel.
Loading...
or support indie stores by buying on