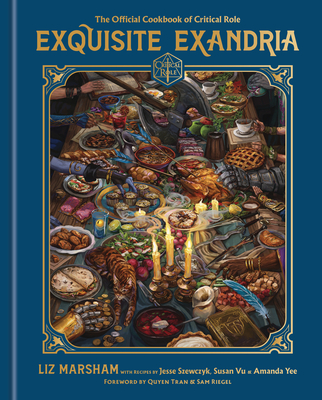 The Official Cookbook of Critical Role

Featuring sixty delicious recipes from across the world of Critical Role, every Critter will find something to whet their appetites in this official cookbook.

Join a party of culinary adventurers in search of the fabulous flavors and delightful delicacies that make Exandria so exquisite. Here, they present their bounty: sixty dishes collected from each continent!

Start in Tal’Dorei, where you can nab a trio of pastries from the Slayer’s Cake, a staple of Whitestone’s patisserie scene. Journey next to the birthplace of civilization, Issylra, and devour some absolutely divine Highsummer Honey Polenta. Travel to Marquet and explore Jrusar’s Core Spire while enjoying some street meat. And finally, end in Wildemount, where you can unwind with a famous Ruby of the Sea Cocktail.

The recipes from these diverse dives are accompanied by the histories of each land—and stories of iconic culinary capers by Vox Machina, the Mighty Nein, Bells Hells, and more. Enjoy Percival de Rolo’s Revenge Pasta, stuffed with enough garlic to ward off even the strongest vampires, and blackberry and lemon hand pies inspired by Scanlan’s favorite spell. Prepare for battle with Jester’s Sweet Feast, a platter of pastries made complete with a dash of cinnamon and a covert sprinkle of the Dust of Deliciousness. And as the night comes to a close, settle down with Lord Eshteross’s Maple Ginger Cookies.

With a foreword by Quyen Tran and Sam Riegel, gorgeous illustrations and photography to accompany mouthwatering recipes, and lore from each corner of Exandria, this is a must-have cookbook for every Critical Role fan.

Liz Marsham has written books of all types for readers of all ages, including the New York Times bestseller The World of Critical Role. As a D&D character, she would most likely be a warlock: she can do a couple of cool things in a row, but then she needs a nap. She runs a tiny fiefdom in southern California with her husband, son, two cats, and what she insists is a “perfectly reasonable” number of dice.

Jesse Szewczyk is a food stylist and recipe developer based in New York. He was named a Forbes 30 Under 30 of Food & Drink for 2021 and is the author of Tasty Pride, a collection of 75 recipes and stories from the queer food community that raised $50,000 for GLAAD, as well as Cookies: The New Classics, which was named one of the best cookbooks of 2021 by The New York Times.

Susan Vu lives in a multiverse where she splits her time between Los Angeles, New York, and wherever her next adventure is. She recipe develops, food styles, and culinary produces in between chasing her favorite band around the world.

Amanda Yee is the Creative Director of 4 Color Imprint and author of The Official Friends Cookbook. She has a background in English, Sociology, and Culinary Arts and often dabbles in food writing, recipe development, and food styling. When she’s not working, she’s dreaming about her next surf adventure.
Loading...
or support indie stores by buying on