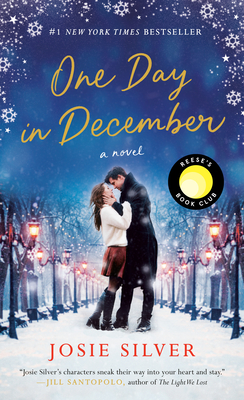 One Day in December

“The perfect book to get lost in . . . Josie Silver’s characters sneak their way into your heart and stay.”—Jill Santopolo, author of The Light We Lost

Laurie is pretty sure love at first sight doesn't exist anywhere but the movies. But then, through a misted-up bus window one snowy December day, she sees a man who she knows instantly is the one. Their eyes meet, there's a moment of pure magic...and then her bus drives away.

Certain they're fated to find each other again, Laurie spends a year scanning every bus stop and cafe in London for him. But she doesn't find him, not when it matters anyway. Instead they "reunite" at a Christmas party, when her best friend Sarah giddily introduces her new boyfriend to Laurie. It's Jack, the man from the bus. It would be.

What follows for Laurie, Sarah and Jack is ten years of friendship, heartbreak, missed opportunities, roads not taken, and destinies reconsidered. One Day in December is a joyous, heartwarming and immensely moving love story to escape into and a reminder that fate takes inexplicable turns along the route to happiness.

Praise For One Day in December: A Novel…

“Get ready to be swept up in a whirlwind romance. Laurie falls in love at first sight with a stranger, and spends the next year looking for him. Fate brings them back together at Christmas, but not in the way anybody expects: turns out he’s dating her best friend. It absolutely charmed me.” —Reese Witherspoon

“Josie Silver writes with a warmth so palpable her characters sneak their way into your heart and stay for a long time. One Day in December is an exploration of love that reads like a thriller, filled with secrets and heart-aching betrayals. The perfect book to get lost in this holiday season.”
—Jill Santopolo, author of The Light We Lost

“Consider setting aside some time and prepare to be charmed as author Josie Silver takes readers on a captivating journey — where female friendship is as important as romantic love…One Day in December is an unmistakable winner.”
—USA Today

“One Day in December is the SWEETEST love story. It’s gorgeous, absolutely lovely. Readers are going to love it.”
—Marian Keyes

“A must-read. In Josie Silver’s charming rom-com, Laurie experiences love at first sight through her bus window… then the car pulls away… What follows is a decade of heartache, betrayal, and destiny.”
—US Weekly

“In Josie Silver’s One Day in December, a chance encounter on a London bus turns into a Bridget Jones-inspired romp.”
—Cosmopolitan, Best Month Ever

“Love at first sight! But he’s her BFF’s new BF. What to do? Do you really have to ask?”
—Entertainment Weekly

“The pacing is just right, the tone warm, and the characters sympathetic… Anyone who believes in true love or is simply willing to accept it as the premise of a winding tale will find this debut an emotional, satisfying read.”
—Kirkus Reviews

“It’s never too early to get into the Christmas spirit. Pick up One Day in December for a heartwarming holiday romance about a love triangle that spans 10 years.”
—HelloGiggles

"For when you watch "Love Actually" on repeat in December...get all the holiday feels in your reads too."
—theSkimm

“One Day in December will have you believing in love.”
—Refinery29

“One Day in December is a charming story about love and serendipity for the hopeless romantic in all of us.”
—PopSugar

“This poignant romance warmed my heart like a mug of cocoa on a snowy day!”
—First for Women

“One Day in December is a joyous, heartwarming and immensely moving love story to escape into and a reminder that fate takes inexplicable turns along the route to happiness.”
—Modern Mrs. Darcy

“If Love Actually met Sliding Doors and became a novel influenced by Jojo Myers, you’d have One Day in December. There’s just something about Christmas and the UK that’s a recipe for modern rom-coms that will have you running for the mistletoe.”
—Fodor's

"The novelistic equivalent to Love Actually."
—The Bookseller

“A holiday love triangle and the pursuit of new and unlikely romances make this new novel simply magical.”
—SheReads

“Silver’s lovely debut follows two young Londoners after a missed connection alters the course of their lives… Silv­­er’s propulsive narrative is enjoyable, and the mix of tension and affection between Jack and Laurie is charming, addictive, and effective. Readers who like quirky love stories will be satisfied by this cinematic novel.”
—Publishers Weekly

“Silver writes with verve and charm in this debut, and readers will be pulling for Laurie and Jack as they detour through missteps and misunderstandings.”
—Booklist

"Readers who enjoy contemporary romance will root for Laurie and Jack as they work through laughter-through-tears experiences and toward a happily-ever-after worth fighting for."
—Library Journal

“I recently devoured this delicious novel, which follows a young woman who falls in love at first sight with someone who soon becomes her best friend’s long-term boyfriend. I finished it in one sitting — it was like candy.”
—Hannah Orenstein, author of Playing with Matches

JOSIE SILVER is an unashamed romantic who met her husband when she stepped on his foot on his twenty-first birthday. She lives with him, her two young sons, and their cats in a little town in England called Wolverhampton.
Loading...
or support indie stores by buying on