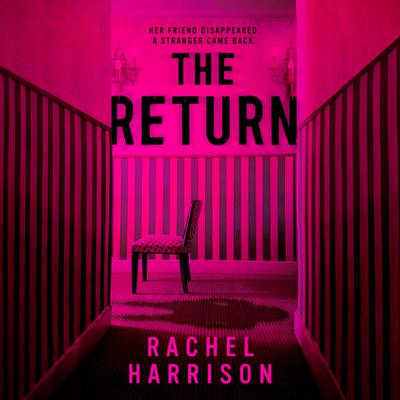 A group of friends reunite after one of them has returned from a mysterious two-year disappearance in this edgy and haunting debut.

Julie is missing, and no one believes she will ever return—except Elise. Elise knows Julie better than anyone, and feels it in her bones that her best friend is out there and that one day Julie will come back. She’s right. Two years to the day that Julie went missing, she reappears with no memory of where she’s been or what happened to her.

Along with Molly and Mae, their two close friends from college, the women decide to reunite at a remote inn. But the second Elise sees Julie, she knows something is wrong—she’s emaciated, with sallow skin and odd appetites. And as the weekend unfurls, it becomes impossible to deny that the Julie who vanished two years ago is not the same Julie who came back. But then who—or what—is she?

Rachel Harrison was born and raised in the weird state of New Jersey. She received her bachelor's in Writing for Film & Television from Emerson College. After graduating, she worked on TV game shows, in publishing, and for a big bank. She lives in Brooklyn with her husband and their cat/overlord. This is her first novel.