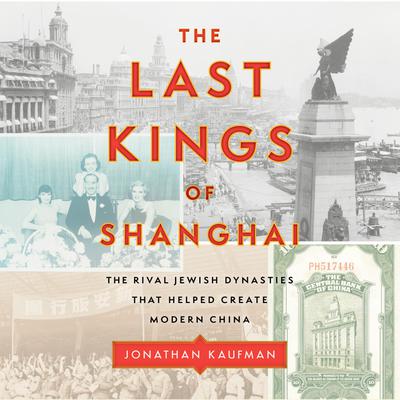 Shanghai, 1936. The Cathay Hotel, located on the city's famous waterfront, is one of the most glamorous in the world. Built by Victor Sassoon--billionaire playboy and scion of the Sassoon dynasty--the hotel hosts a who's who of global celebrities: Noel Coward has written a draft of Private Lives in his suite and Charlie Chaplin has entertained his wife-to-be. And a few miles away, Mao and the nascent Communist Party have been plotting revolution.

By the 1930s, the Sassoons had been doing business in China for a century, rivaled in wealth and influence by only one other dynasty--the Kadoories. These two Jewish families, both originally from Baghdad, stood astride Chinese business and politics for more than 175 years, profiting from the Opium Wars; surviving Japanese occupation; courting Chiang Kai-shek; and losing nearly everything as the Communists swept into power. In The Last Kings of Shanghai, Jonathan Kaufman tells the remarkable history of how these families participated in an economic boom that opened China to the world, but remained blind to the country's deep inequality and to the political turmoil at their doorsteps. In a story stretching from Baghdad to Hong Kong to Shanghai to London, Kaufman enters the lives and minds of these ambitious men and women to forge a tale of opium smuggling, family rivalry, political intrigue, and survival.

The book lays bare the moral compromises of the Kadoories and the Sassoons--and their exceptional foresight, success, and generosity. At the height of World War II, they joined together to rescue and protect eighteen thousand Jewish refugees fleeing Nazism. Though their stay in China started out as a business opportunity, the country became a home they were reluctant to leave, even on the eve of revolution. The lavish buildings they built and the booming businesses they nurtured continue to define Shanghai and Hong Kong to this day. As the United States confronts China's rise, and China grapples with the pressures of breakneck modernization and global power, the long-hidden odysseys of the Sassoons and the Kadoories hold a key to understanding the present moment.

JONATHAN KAUFMAN is a Pulitzer Prize-winning reporter and editor and author of A Hole in the Heart of the World: Being Jewish in Eastern Europe and Broken Alliance: The Turbulent Times Between Blacks and Jews in America, which won the National Jewish Book Award. He is Director of the School of Journalism at Northeastern University in Boston and a full Professor of Journalism. He has written and reported on China for thirty years for The Boston Globe, where he covered the 1989 massacre in Tiananmen Square; The Wall Street Journal, where he served as China bureau chief from 2002 to 2005; and Bloomberg News. He regularly appears on TV and NPR, and frequently lectures on college campuses, before government agencies, and to community groups and at book fairs. A graduate of Yale College with a master's degree in East Asian Studies from Harvard, he lives outside of Boston with his family.