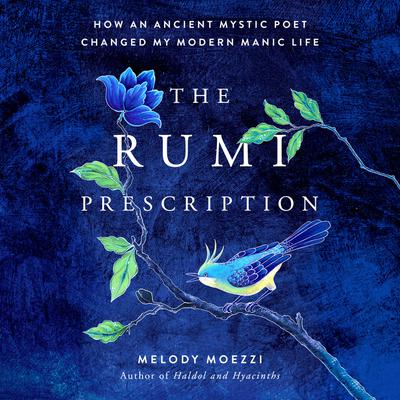 How an Ancient Mystic Poet Changed My Modern Manic Life

A powerful personal journey to find meaning and life lessons in the words of a wildly popular 13th century poet.

Rumi's inspiring and deceptively simple poems have been called ecstatic, mystical, and devotional. To writer and activist Melody Moezzi, they became a lifeline. In The Rumi Prescription, we follow her path of discovery as she translates Rumi's works for herself - to gain wisdom and insight in the face of a creative and spiritual roadblock. With the help of her father, who is a lifelong fan of Rumi's poetry, she immerses herself in this rich body of work, and discovers a 13th-century prescription for modern life.

Addressing isolation, distraction, depression, fear, and other everyday challenges we face, the book offers a roadmap for living with intention and ease, and embracing love at every turn--despite our deeply divided and chaotic times. Most of all, it presents a vivid reminder that we already have the answers we seek, if we can just slow down to honor them.

•  You went out in search of gold far and wide, but all along you were gold on the inside.

•  Become the sky and the clouds that create the rain, not the gutter that carries it to the drain.

•  You already own all the sustenance you seek. If only you'd wake up and take a peek.

•  Quit being a drop. Make yourself an ocean.

MELODY MOEZZI is a writer, speaker, activist, commentator, columnist, attorney and award-winning author. Her books include War on Error: Real Stories of American Muslims, and more recently, Haldol and Hyacinths: A Bipolar Life (Avery, 2013), which earned wide critical acclaim and broke new ground as the first mainstream mental health memoir by either a Muslim or a Middle-Easterner. Moezzi is a blogger for Ms. Magazine, and a featured regular columnist, blogger and vlogger for bp [Bipolar] Magazine. She maintains her own YouTube channel and video blog, A Saner Spin, answering readers' questions and addressing a variety of issues, including mental health, wellness and spirituality. Moezzi's writing has appeared in The New York Times, The Washington Post, The Christian Science Monitor, NPR, CNN, The Daily Beast, The Guardian, Hürriyet, and The South China Morning Post, among many other outlets.