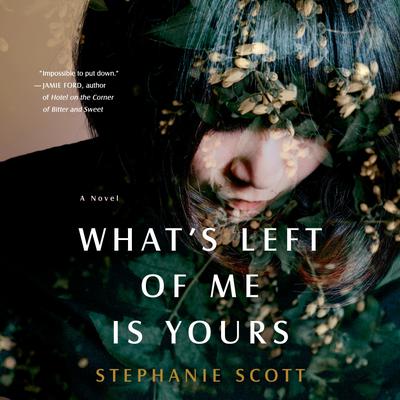 What's Left of Me Is Yours (Digital Audiobook)

"Each chapter of this enrapturing novel is elegantly brief and charged with barely contained emotion." --New York Times Book Review

A gripping debut set in modern-day Tokyo and inspired by a true crime, for readers of Everything I Never Told You and The Perfect Nanny, What's Left of Me Is Yours charts a young woman's search for the truth about her mother's life--and her murder.

In Japan, a covert industry has grown up around the "wakaresaseya" (literally "breaker-upper"), a person hired by one spouse to seduce the other in order to gain the advantage in divorce proceedings. When Satō hires Kaitarō, a wakaresaseya agent, to have an affair with his wife, Rina, he assumes it will be an easy case. But Satō has never truly understood Rina or her desires and Kaitarō's job is to do exactly that--until he does it too well. While Rina remains ignorant of the circumstances that brought them together, she and Kaitarō fall in a desperate, singular love, setting in motion a series of violent acts that will forever haunt her daughter's life.

Told from alternating points of view and across the breathtaking landscapes of Japan, Stephanie Scott exquisitely renders the affair and its intricate repercussions. As Rina's daughter, Sumiko, fills in the gaps of her mother's story and her own memory, Scott probes the thorny psychological and moral grounds of the actions we take in the name of love, asking where we draw the line between passion and possession.

STEPHANIE SCOTT is a Singaporean/British writer who was born and raised in S.E. Asia. She is a graduate of the Faber Academy and has a Masters Degree in Creative Writing from Oxford University. The proposal for What's Left of Me Is Yours won the British Association of Japanese Studies Toshiba Studentship and the unpublished manuscript was awarded the A.M. Heath Prize, the Arvon Jerwood Prize for Literature and was runner up in the Bridport Prize Peggy Chapman-Andrews First Novel Award.