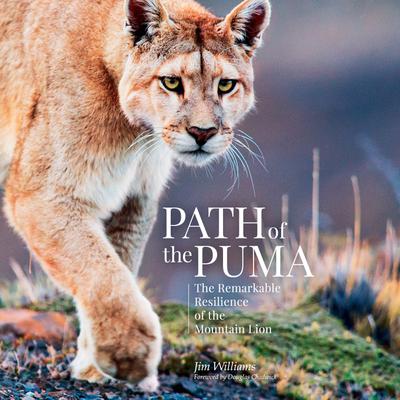 Path of the Puma (Digital Audiobook)

The Remarkable Resilience of the Mountain Lion (Patagonia)

During a time when most wild animals are experiencing decline in the face of development and climate change, the intrepid mountain lion -- also known as a puma, a cougar, and by many other names - has experienced reinvigoration as well as expansion of territory. What makes this cat, the fourth carnivore in the food chain -- just ahead of humans - so resilient and resourceful? And what can conservationists and wild life managers learn from them about the web of biodiversity that is in desperate need of protection? Their story is fascinating for the lessons it can afford the protection of all species in times of dire challenge and decline.

Jim Williams has spent his entire life finding the wild. Jim left the farm country of Iowa and spent his formative years as a young surf bum turned biology student in the Pacific Beach area of San Diego. He did his undergraduate work at San Diego State and Florida State Universities and his graduate studies at Montana State University in Bozeman. Jim is an award-winning, professionally certified wildlife biologist and has been working for Montana Fish, Wildlife and Parks for 25 years. Jim studied mountain lion ecology for his Master's Degree on Montana's Rocky Mountain Front and has been working on mountain lion and other wildlife conservation issues in various roles ever since. He has been working with biologists in Chile and Argentina on a variety of wildlife conservation projects. Jim and his wife Melora live and work in Montana's beautiful Flathead Valley just west of Glacier National Park.

Joe Glickman was the author of Fearless: One Woman, One Kayak, One Continent (Falcon Guide, 2012), The Kayak Companion (Storey, 2003), and To the Top (Northword, 2003). Glickman's work has appeared in The New York Times, The Daily News, Newsday, The Village Voice, Outside, Men's Journal, Inside Sports, Adventure Cyclist, Runner's World, US, EcoTraveler, The Paddler, Sea Kayaker, Women's Sports & Fitness, and Brooklyn Bridge. He co-wrote (with Allen Barra) That's Not the Way It Was, a book about myths in sports.

A wildlife biologist who studied mountain goats and grizzlies in the Rockies, elephants in Africa, and whales in the world's oceans, Doug Chadwick also writes about natural history, conservation, and wildlife around the world, from right whales in the sub-Antarctic to snow leopards in the Himalayas, producing close to fifty articles for National Geographic magazine. In addition, he has written thirteen books about wildlife and conservation, including The Wolverine Way, Tracking Gobi Grizzlies, Yellowstone to Yukon and the lead chapter in Crown of the Continent: The Wildest Rockies, a photographic celebration of the region's wildlife and scenic majesty.