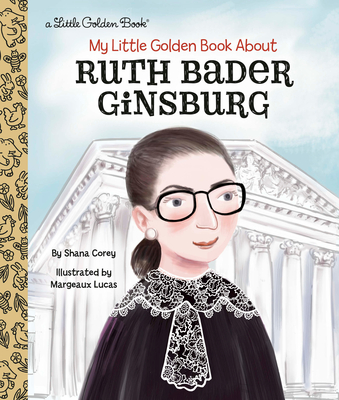 Help your little one dream big with a Little Golden Book biography all about the late Supreme Court Justice Ruth Bader Ginsburg! The perfect introduction to nonfiction for preschoolers!

This Little Golden Book is a compelling introduction to an inspiring woman, written for the youngest readers. From a young age, Ruth Bader Ginsburg knew that she wanted to fight for girls and women to have equal rights. She studied and worked very hard and became just the second woman--and the first Jewish woman--to be a United States Supreme Court Justice. This is a terrific read for future trailblazers and their parents!

MARGEAUX LUCAS began drawing constantly from age four. Her love of picture books came from the many hours she spent before bedtime reading from the collection at her grandmother's house. Margeaux's work reflects her love of fashion, nature, and the many shapes, sizes, and colors that people come in, plus the constant exuberance of children.
Loading...
or support indie stores by buying on