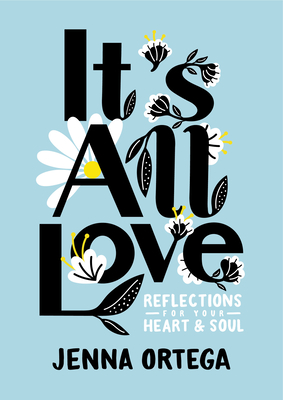 An empowering collection written by Jenna Ortega, the award-winning actress starring in the hit Netflix series WEDNESDAY. These deeply personal stories and quotes are accompanied by beautiful illustrations that explore Jenna's struggles with depression, experiences falling in—and out of—love, the loss of close family members, and growing up Latina in Hollywood.

You are not alone.
We are in this together.

This collection from actress Jenna Ortega is filled with her own original quotes and affirmations that will inspire you to lean into faith and love and family during life's most difficult, and most joyous, moments.

Jenna's vulnerability in her writing will remind readers that there’s power within us all and we are not alone in our struggles.

Praise For It's All Love: Reflections for Your Heart & Soul…

JENNA ORTEGA is the award-winning actress currently starring in the hit Netflix series WEDNESDAY. Jenna's rise to stardom began in 2014 when she was cast as Young Jane in the Golden Globe-nominated series Jane the Virgin. She also played the lead in Disney Channel's Stuck in the Middle, starred in season two of Netflix's You, and voices one of the main characters on Disney Junior's animated series Elena of Avalor. Her upcoming films include Jennifer Garner's Yes Day, Netflix's The Babysitter: Killer Queen, and Songbird. Jenna is the new face of Neutrogena, and she also partners with charitable organizations such as the National Bullying Prevention Center, the AIDS Healthcare Foundation, and the Geena Davis Institute.
Loading...
or support indie stores by buying on