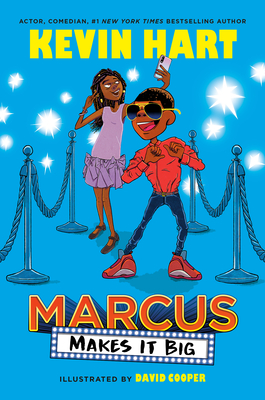 From celebrity author Kevin Hart comes the laugh-out-loud highly illustrated sequel to Marcus Makes a Movie about a young boy who has big Hollywood dreams--and the hustle to make it happen.

"Everybody, grab a ticket and run for a front row seat to Marcus Makes a Movie!" —Judd Winick, New York Times bestselling author of the Hilo series

Marcus’s movie, Toothpick vs. the Doom, is a HIT! But the only thing harder than making a movie is making a SECOND one. Marcus needs to come up with another great idea fast. Too bad his film crew (aka friends) are too preoccupied with their MeTube channels to notice. An invite to The Helen Show has Marcus thinking they’ll be back on top, but will nerves, unchecked ambition, and a rivalry between friends shut down this show before it even begins?

In the laugh-out-loud sequel, actor and comedian Kevin Hart delivers a message about being creative, working hard, and learning that sometimes the best dreams are the ones you achieve with your friends.

Praise For Marcus Makes It Big…

"A delightfully funny read that accurately deals with the challenges of internet fame and nurturing friendships.” –Kirkus Reviews

Kevin Hart is an award-winning actor, a comedian, and a number one New York Times bestselling author. His films, including Fatherhood, Jumanji, Captain Underpants, and The Secret Life of Pets, have earned billions at the box office, and his stand-up comedy tours have sold out arenas and football stadiums, leading Forbes to name him the “king of comedy.” His first middle-grade novel, Marcus Makes a Movie, was an instant New York Times bestseller and published to great critical acclaim, with Kirkus Reviews praising it as “a charming read . . . that celebrates the gifts of authentic friendship” and Publishers Weekly calling it an “energetic love letter to the artistic process.” In the laugh-out-loud sequel, Kevin delivers a heartfelt message about the perils of sudden fame and the importance of sticking close to the friends and family who helped get you there.

Kevin is also an entrepreneur, a television producer, and the chairman of the Laugh Out Loud Network and CEO of HartBeat Productions. He lives in Los Angeles with his family.
@KevinHart4real
Loading...
or support indie stores by buying on