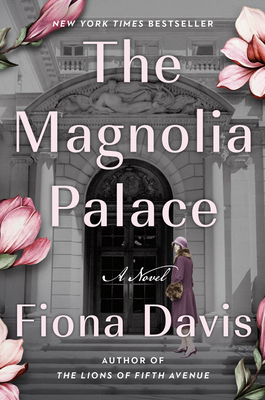 Fiona Davis, New York Times bestselling author of The Lions of Fifth Avenue, returns with a tantalizing novel about the secrets, betrayal, and murder within one of New York City's most impressive Gilded Age mansions.

Eight months since losing her mother in the Spanish flu outbreak of 1919, twenty-one-year-old Lillian Carter's life has completely fallen apart. For the past six years, under the moniker Angelica, Lillian was one of the most sought-after artists' models in New York City, with statues based on her figure gracing landmarks from the Plaza Hotel to the Brooklyn Bridge. But with her mother gone, a grieving Lillian is rudderless and desperate—the work has dried up and a looming scandal has left her entirely without a safe haven. So when she stumbles upon an employment opportunity at the Frick mansion—a building that, ironically, bears her own visage—Lillian jumps at the chance. But the longer she works as a private secretary to the imperious and demanding Helen Frick, the daughter and heiress of industrialist and art patron Henry Clay Frick, the more deeply her life gets intertwined with that of the family—pulling her into a tangled web of romantic trysts, stolen jewels, and family drama that runs so deep, the stakes just may be life or death.

Nearly fifty years later, mod English model Veronica Weber has her own chance to make her career—and with it, earn the money she needs to support her family back home—within the walls of the former Frick residence, now converted into one of New York City's most impressive museums. But when she—along with a charming intern/budding art curator named Joshua—is dismissed from the Vogue shoot taking place at the Frick Collection, she chances upon a series of hidden messages in the museum: messages that will lead her and Joshua on a hunt that could not only solve Veronica's financial woes, but could finally reveal the truth behind a decades-old murder in the infamous Frick family.

Praise For The Magnolia Palace: A Novel…

Praise for The Magnolia Palace
“Combining a mansion turned museum, a missing diamond, a mystery, and the lives of two young women separated by half a century, Fiona Davis stirs up a beguiling story that unfolds like a clever game of Clue. Suspicions abound, and an iconic New York City landmark stands poised to reveal a page-turning tale of wealth, family dynamics, and long-held secrets.”
—Lisa Wingate, #1 New York Times bestselling author of Before We Were Yours

“Fiona Davis is at the top of her game in this intriguing, high-stakes novel about an iconic New York City landmark, the Frick mansion, and two women, fifty years apart, whose stories intersect within it. A family saga and historical thriller in one, The Magnolia Palace is a fast-paced, immersive delight.”
—Christina Baker Kline, #1 New York Times bestselling author of Orphan Train and The Exiles

“Rich with family drama, tangled romance, cryptic clues, and long-buried secrets, The Magnolia Palace is sure to be loved by Fiona Davis's devoted and new readers alike. A can't-miss for anyone who has sauntered through an art museum and found themselves tempted to peek behind a painting or two.”
—Sarah Penner, New York Times bestselling author of The Lost Apothecary

“I savor every glorious new Fiona Davis novel and The Magnolia Palace has it all—two intriguing heroines, two fabulous time periods to get swept up in, and a delicious mystery that keeps you on tenterhooks. I loved every minute of it!”
—Martha Hall Kelly, New York Times bestselling author of Lilac Girls and Sunflower Sisters

“Once again, using her trademark brilliance, Fiona Davis transports her readers into a mysterious past lurking beneath the surface of our modern-day world. In The Magnolia Palace, two very different women from two eras enter the Gilded Age realm of famous industrialist and art collector Henry Clay Frick and his imperious daughter, Helen, and become part of a thrilling mystery centered on the Frick mansion that stretches through the decades. Readers will never look at a historic building quite the same way again.”
—Marie Benedict, New York Times bestselling author of The Mystery of Mrs. Christie

“The magic of Fiona Davis is the tenderness with which she crafts her settings, so that they bloom into characters themselves. We come to know them. We come to love them. And they help us to understand our place in time. The Magnolia Palace is a love letter to art and history. An intriguing, beautiful read.”
—Sarah Addison Allen, New York Times bestselling author

“No one brings New York City to life like Fiona Davis. With The Magnolia Palace, Davis turns her brilliant storytelling to the Frick mansion, focusing on the strong women who made the Frick a New York icon—some on canvas, others scions of the famous family. It’s historical fiction at its best, marked by the complexity of female friendship, the glamour of the art world, and having the moxie to reinvent yourself.”
—Karin Tanabe, author of The Gilded Years

“Another brilliant historical thriller from Davis, this time set in a Gilded Age mansion in New York City. You will fall in love with Lillian, the penniless young artist’s model surviving the Spanish flu of 1919; and Veronica, the young mod model of the 1960s; and Davis’s deftly written and beautifully woven feminist storytelling.”
—Tara Moss, #1 internationally bestselling author of The War Widow

“Iconic buildings are larger-than-life characters in Fiona Davis’s novels, and The Magnolia Palace is no exception.”
—New York Post

“A book that's as beautiful as it is mysterious. The dual POV keeps the reader on their toes until the entire story comes together.”
—BuzzFeed

“The pages breeze by as potential romances develop (maybe not the ones you’d expect) and a mystery involving the whereabouts of the Magnolia diamond unfolds. Deeper issues also undergird both narratives, which confront stereotypes about models and explore how a tragedy can warp family relationships years later. The two narratives dovetail in a satisfying way. Mystery and art lovers should relish this exciting escape into New York’s past.”
—Historical Novel Society

“Bestselling author Fiona Davis builds upon the secrets of the Frick Collection in a delightful blend of emotion and adventure. . . . Davis knows exactly how to structure a story and how to switch between timelines. . . . A captivating story whose characters are richly drawn, The Magnolia Palace pays particular attention to those who might go unnoticed: the deaf private secretary, the museum intern, the organ player. We discover their private lives and public exposures, which reveal the daily messiness of human lives, the construction of the self, and the truths we try so hard to hide.”
—BookPage

“Readers are transported back to 1919 New York in this richly captivating tale.”
—Woman’s World

“Davis embellishes the real lives of the Frick family and Audrey Munson, a sculptors' muse, in a tale that will thrill fans of Anna Pitoniak and Karen Harper. She also jumps skillfully between the roaring twenties and the swinging sixties as another model explores the Frick Collection decades later. Davis's insider's perspective on the esteemed Frick family gives equal weight to those who kept the family afloat.”
—Booklist

“Artfully meshes the educational with the sensational.”
—Kirkus Reviews

“There are many pleasures in Fiona Davis’s novels. . . . Davis imbues [Manhattan landmarks] with intimacy and familiarity through the deeply felt emotions of her characters. Equally intriguing are the points of intersection between generations of young women. . . . Quietly seeking the truth about themselves and the world, Davis’s heroines overcome pain and loss to reach a resolution, in the past and present.”
—BookTrib

“Fiona Davis has deployed an unmatched skill for unspooling compelling dramas amid some of New York's most glittering historical moments. . . . The Magnolia Palace tells the story of two different women whose lives are changed at the Frick mansion, giving readers the chance to soak in dual eras of history all while great love, epic loss, dazzling fortunes, and foul play are afoot.”
—Town & Country

"After spending all days on screens, I love picking up an actual book— especially if the strory transports me to a pre-screen era!...I adored going back in time to New York in the '20s." —Patty Bontekoe, Executive Editor of First For Women

Fiona Davis is the New York Times bestselling author of several novels, including The Dollhouse, The Address, The Masterpiece, The Chelsea Girls, The Lions of Fifth Avenue, and The Magnolia Palace. She lives in New York City and is a graduate of the Columbia Journalism School.
Loading...
or
Not Currently Available for Direct Purchase