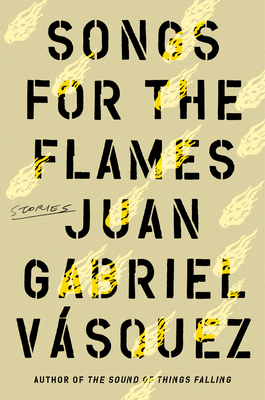 Songs for the Flames

The characters in Songs for the Flames are men and women touched by violence—sometimes directly, sometimes only in passing—but whose lives are changed forever, consumed by fire and by unexpected encounters and unyielding forces.

A photographer becomes obsessed with the traumatic past that an elegant woman, a fellow guest staying at a countryside ranch, would rather leave behind. A military reunion forces a soldier to confront a troubling history, both personal and on a larger scale. And in a tour-de-force piece, the search for a book leads a writer to the fascinating story of why a woman is buried next to a graveyard, rather than in it—and the remarkable account of her journey from France to Colombia as a child orphan.

Juan Gabriel Vásquez returns to stories with these nine morally complex tales, fresh proof of his narrative versatility and his profound understanding of the lives of others. There’s a romantic wistfulness that combusts with the realities of dangerous histories, both personal and political, to throw these characters into the flames from which they either emerge purified, reborn, or burned and destroyed.

Praise For Songs for the Flames: Stories…

Praise for Songs for the Flames

“[H]aunting and beautiful… Songs for the Flames is a book about war and imperialism, which in Vasquez’s view never really end, but rather mutate: devolving here into individual traumas paid out over generations, evolving there into state corruption and endless cycles of violence…. [A] book about secrets and lies, which is to say speech acts: their tremendous power, but also the limits of that power and the wretched ecstasy of revelation. Or recognition. Because discovering a secret is not the same as being told one, which is something else again from having a secret to protect.” –New York Times

“Politics thread throughout this fiercely imagined collection as the Colombian master excavates the aftermath of violent upheaval, characters adrift in dread and wonder…We’re shocked, shocked by the genius in his craft.” –Oprah Daily

“The power of [the story] ‘Woman on the Riverbank’ comes from the author’s refusal to create easy drama, his insistence on loose ends taking on a power of their own, his belief that mystery holds a truth that lives beyond fact or beyond simple explanation.” –Electric Literature

“Immediately upon finishing Songs for the Flames, I wanted to start reading it again…. Juan Gabriel Vásquez is a major voice on the world literary stage, and his fiction does not look away or blink in the face of adversity.” –World Literature Today

“A bravura collection blending autofiction with stories of historical and personal trauma…Vásquez continues to distinguish himself among the finest writers from Latin America.” –Publishers Weekly, starred review

“Vásquez paints a picture of a country that’s constantly buffeted by violent political rivalries, narcos, and war and where even bystanders get drawn in. A bracing set of stories about smaller traumas embedded among a country’s larger crises.” –Kirkus Reviews

"Like Bolaño, [Vasquez] is a master stylist and a virtuoso of patient pacing and intricate structure." – Lev Grossman, Time Magazine

“The narrative escalates, the mystery deepens, and the scope of the story widens with each page.” – Khaled Hosseini

“Juan Gabriel Vásquez is one of the most original new voices of Latin American literature.” —Mario Vargas Llosa

Juan Gabriel Vásquez's previous books include the International IMPAC Dublin Literary Award winner and national bestseller The Sound of Things Falling, and Man Booker International finalist The Shape of the Ruins, as well as the award-winning Reputations, The Informers, The Secret History of Costaguana, and the story collection Lovers on All Saints' Day. His books have been published in twenty-eight languages worldwide. After sixteen years in Europe, he now lives in Bogotá.

Anne McLean is a Spanish translator who has twice won both the Independent Foreign Fiction Prize and the Premio Valle Inclán, and received the International IMPAC Dublin Literary Award with Juan Gabriel Vásquez for his novel The Sound of Things Falling. She lives in Toronto.
Loading...
or support indie stores by buying on