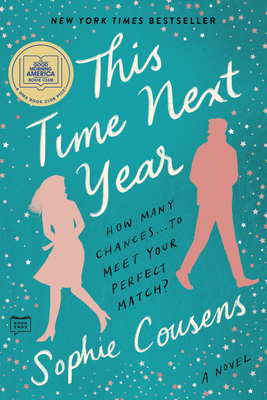 This Time Next Year

Their lives began together, but their worlds couldn't be more different. After thirty years of missed connections, they're about to meet again...

Minnie Cooper knows two things with certainty: that her New Year's birthday is unlucky, and that it's all because of Quinn Hamilton, a man she's never met. Their mothers gave birth to them at the same hospital just after midnight on New Year's Day, but Quinn was given the cash prize for being the first baby born in London in 1990--and the name Minnie was meant to have, as well. With luck like that, it's no wonder each of her birthdays has been more of a disaster than the one before.

When Minnie unexpectedly runs into Quinn at a New Year's party on their mutual thirtieth birthday, she sees only more evidence that fortune has continued to favor him. The gorgeous, charming business owner truly seems to have it all--while Minnie's on the brink of losing her pie-making company and her home. But if Quinn and Minnie are from different worlds, why do they keep bumping into each other? And why is it that each fraught encounter leaves them both wanting more?

A moving, joyful love story, This Time Next Year explores the way fate leads us to the people we least expect--no matter what the odds.

Praise For This Time Next Year…

“A funny, pull-at-your-heartstrings read, this is the perfect companion for curling up with hot chocolate and a blanket. Unashamedly romantic and packed full of holiday sparkle, it’s a hug in book form.”—Josie Silver, author of One Day in December

“[A] cute contemporary romantic comedy...The characters in this page-turning novel are richly drawn and transform substantially, especially Minnie, and all suggest that maybe happy ever after is up to us.”—NPR Books

"If you make time for just one holiday read this year, make it Sophie Cousens's This Time Next Year."—PopSugar

"[A] touching debut...Flashbacks to New Year’s past and subplots...add depth, while hilarious secondary characters inject levity in just the right places...Cousens’s debut is ripe with both emotional vulnerability and zaniness."—Publishers Weekly

“This Time Next Year is a clever, offbeat romantic comedy...Cousens's colorful, quirky cast becomes embroiled in big, memorable scenes...Rom-com readers will revel in Cousens's wry, lively story, which probes themes of self-discovery, acceptance and forgiveness, and the abiding nature of friendship.”—Shelf Awareness

"Sparkling and uplifting."—Mhairi McFarlane, author of If I Never Met You

"Heart-warming and unashamedly romantic."—Ruth Jones, author of Us Three

"Swooningly romantic...I didn't want to put it down'"—Kirsty Greenwood, author of He Will Be Mine

"A beautiful debut full of heart, soul and serendipity with characters you can't help but fall in love with."—Alex Brown, author of A Postcard from Italy

"This Time Next Year will make you laugh, cry and keep reading long into the night - it's the escapist read everyone needs right now."—Holly Martin, author of Autumn Skies Over Ruby Falls

Sophie Cousens worked as a TV producer in London for more than twelve years and now lives on the island of Jersey in the UK, balancing her writing career with working for an arts charity and taking care of her two small children. This Time Next Year is her first novel.
Loading...
or support indie stores by buying on