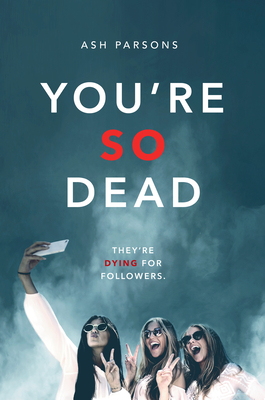 A hilarious Agatha Christie-inspired YA thriller-comedy about three best friends who sneak into an influencers-only festival event (gone wrong), only to discover a killer is in their midst--and they have to uncover the truth and solve the mystery before it's too late. Perfect for fans of One of Us Is Lying and Truly Devious.

Plum Winter has always come in second to her sister, the unbelievably cool, famous influencer Peach Winter. And when Peach is invited to an all-expenses-paid trip to a luxurious art-and-music festival for influencers on a private island in the Caribbean, Plum decides it's finally her time to shine. So she intercepts the invite--and asks her two best friends, Sofia and Marlowe, to come along to the fest with her. It'll be a spring break they'll never forget.

But when Plum and her friends get to the island, it's not anything like it seemed in the invite. The island is run-down, creepy, and there doesn't even seem to be a festival--it's just seven other quasi-celebrities and influencers, and none of the glitz and glamour she expected. Then people start to die...

Plum and her friends soon realize that someone has lured each of them to the "festival" to kill them. Someone has a vendetta against every person on the island--and no one is supposed to leave alive. So, together, Plum, Sofia, and Marlowe will do whatever it takes to unravel the mystery of the killer, and fight to save themselves and as many influencers as they can, before it's too late.

Praise for You're So Dead:

“You're So Dead is the hilarious, swoony, Surprisingly Stabby book of my dreams! Ash Parsons delivers a sharp send-up of influencer culture wrapped in a clever whodunnit that also has a lot of heart. While I never want to go to "Pyre Festival," I'd hang out with Plum, Marlowe, and Sofia any day.”—Rachel Hawkins, New York Times Bestselling author of The Wife Upstairs

“Parsons (Girls Save the World in This One) gently satirizes online culture and the ill-fated Fyre Festival in this frothy homage to Agatha Christie’s And Then There Were None. The cheeky mystery is both clever and satisfying.” --Publishers Weekly

"[A]riveting thriller-comedy...writing in short, energetic bursts with a witty voice, Parsons keeps the twists coming, her motley crew’s energy running frantic as the body count rises and they try to discover the killer in their midst." --Booklist

Praise For You're So Dead…

Praise for You're So Dead:

“Parsons (Girls Save the World in This One) gently satirizes online culture and the ill-fated Fyre Festival in this frothy homage to Agatha Christie’s And Then There Were None. The cheeky mystery is both clever and satisfying.” --Publishers Weekly

Ash Parsons is a graduate of Ringling Bros. and Barnum & Bailey Clown College as well as other, more traditional schools. She is a PEN America Literary Award Winner for the Phyllis Naylor Working Writer Fellowship. Ash previously taught English to middle and high school students. Ash lives in Alabama with her family. She is also the author of Girls Save the World in This One, Still Waters, and Holding On to You, previously published as The Falling Between Us. Follow her on Twitter @ashparso.
Loading...
or support indie stores by buying on