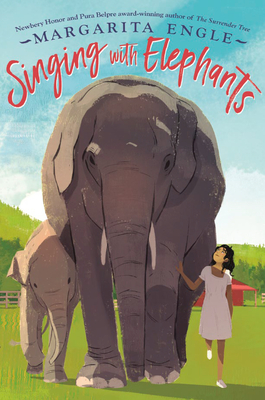 A powerful novel in verse from Newbery and Pura Belpré Award-winning author Margarita Engle about the friendship between a young girl and the poet Gabriela Mistral that leads to healing and hope for both of them.

Cuban-born eleven-year-old Oriol lives in Santa Barbara, California, where she struggles to belong. But most of the time that’s okay, because she enjoys helping her parents care for the many injured animals at their veterinary clinic.

Then Gabriela Mistral, the first Latin American winner of a Nobel Prize in Literature moves to town, and aspiring writer Oriol finds herself opening up. And when she discovers that someone is threatening the life of a baby elephant at her parents’ clinic, Oriol is determined to take action. As she begins to create a world of words for herself, Oriol learns it will take courage and strength to do what she thinks is right—even if it means keeping secrets from those she loves.

A beautifully written, lyrically told story about the power of friendship—between generations, between humans and animals—and the potential of poetry to inspire action, justice, and acceptance.

* "A novel written in verse that sings in your heart." –Pura Belpré Award-winning author Marjorie Agosín


Praise For Singing with Elephants…

“In her tender, funny, far-reaching new novel in verse, Margarita Engle...expands our notion of who gets to do the rescuing in children’s animal stories…Via elegantly efficient narrative poetry, Engle weaves themes of longing and belonging, of communication and the sorts of attachment that are too deep ever to be communicated with words.” —New York Times

“This is a book that readers won’t want to put down until the last page.” —School Library Journal

Margarita Engle (she/her) is the Cuban American author of many books, including the verse novels Your Heart, My Sky; Rima’s Rebellion; Newbery Honor winner The Surrender Tree; and Forest World. Her verse memoirs include Soaring Earth and Enchanted Air, the latter of which received the Pura Belpré Award and a Walter Dean Myers Honor, and was a finalist for the YALSA Award for Excellence in Nonfiction, among other honors. Her picture books include Drum Dream Girl, Dancing Hands, and The Flying Girl. Visit her at MargaritaEngle.com.
Loading...
or support indie stores by buying on