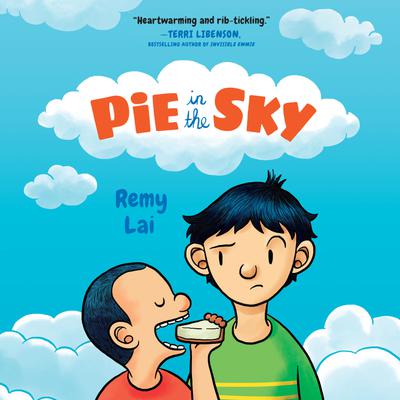 Pie in the Sky (Digital Audiobook)

“If books came in cake form (and WHY NOT, I ask?), Pie in the Sky would be the apple mille-feuille of the bunch. Lai masterfully creates a story of grief, familial love and discord, and alienation that will have readers both biting their nails and loudly guffawing. The character of Jingwen helps us remember that growing up means forgiving yourself and others—even if letting go is the one thing you don’t want to do. A delicious confection that will be devoured by fans of Raina Telgemeier, Vera Brosgol, and Shaun Tan.”
— Hannah DeCamp, Avid Bookshop, Athens, GA
View the List

A poignant, laugh-out-loud middle-grade novel--adapted for audio--about an eleven-year-old boy's immigration experience, his annoying little brother, and their cake-baking hijinks! Perfect for fans of Raina Telgemeier and Gene Luen Yang!

"Pie in the Sky is like enjoying a decadent cake . . . heartwarming and rib-tickling." -Terri Libenson, bestselling author of Invisible Emmie

When Jingwen moves to a new country, he feels like he's landed on Mars. School is torture, making friends is impossible since he doesn't speak English, and he's often stuck looking after his (extremely irritating) little brother, Yanghao.

To distract himself from the loneliness, Jingwen daydreams about making all the cakes on the menu of Pie in the Sky, the bakery his father had planned to open before he unexpectedly passed away. The only problem is his mother has laid down one major rule: the brothers are not to use the oven while she's at work. As Jingwen and Yanghao bake elaborate cakes, they'll have to cook up elaborate excuses to keep the cake making a secret from Mama.

* "The humor [is] akin to that of Jeff Kinney's popular 'Wimpy Kid' series . . . the perfect mixture of funny and emotionally resonant." --School Library Journal, starred review

Remy Lai studied fine arts, with a major in painting and drawing. She was born in Indonesia, grew up in Singapore, and currently lives in Brisbane, Australia, where she writes and draws stories for kids with her two dogs by her side. Pie in the Sky is her debut middle-grade novel. Follow Remy on Twitter @Remy_Lai