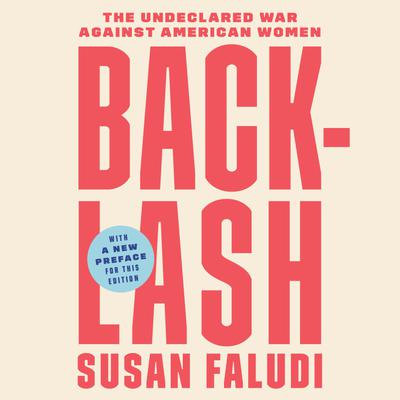 The Undeclared War Against American Women

A new edition of the feminist classic, with an all-new introduction exploring the role of backlash in the 2016 election and laying out a path forward for 2020 and beyond

Winner of the National Book Critics Circle Award • “Enraging, enlightening, and invigorating, Backlash is, most of all, true.”—Newsday

First published in 1991, Backlash made headlines and became a bestselling classic for its thoroughgoing debunking of a decadelong antifeminist backlash against women’s advances. A Pulitzer Prize–winning journalist, Susan Faludi brilliantly deconstructed the reigning myths about the “costs” of women’s independence—from the supposed “man shortage” to the “infertility epidemic” to “career burnout” to “toxic day care”—and traced their circulation from Reagan-era politics through the echo chambers of mass media, advertising, and popular culture.

As Faludi writes in a new preface for this edition, much has changed in the intervening years: The Internet has given voice to a new generation of feminists. Corporations list “gender equality” among their core values. In 2019, a record number of women entered Congress. Yet the glass ceiling is still unshattered, women are still punished for wanting to succeed, and reproductive rights are hanging by a thread. This startling and essential book helps explain why women’s freedoms are still so demonized and threatened—and urges us to choose a different future.

A former Wall Street Journal reporter, Susan Faludi won the Pulitzer Prize in 1991 for explanatory journalism and the National Book Critics’ Circle award for Backlash. She is the author of Stiffed: The Betrayal of the American Man, which was published in 1999, and has written for many publications, including The New Yorker, The Nation, Newsweek, and the New York Times.