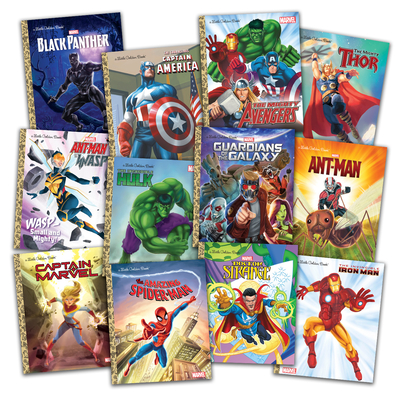 The Invincible Iron Man (Marvel: Iron Man): Clad in invincible armor, Iron Man is always ready to rocket to the rescue. Join this heavy-duty hero to learn all about his amazing armor and most fearsome foes!

The Mighty Thor (Marvel: Thor): Thor, who possesses incredible strength and magical hammer that gives him the power to fly and control the weather, becomes one of Earth’s mightiest heroes! Find out how Thor earned his mighty hammer in this action-packed tale.

Black Panther (Marvel: Black Panther): Meet Marvel’s Black Panther! As an Avenger, this Super Hero uses his strength, speed, and unbreakable claws to pounce evil-doers! Learn all about the Black Panther—from his Wakandan origins to his powers as well as his friends and foes.

Wasp: Small and Mighty! (Marvel Ant-Man and Wasp): When a high-tech villain invades the Avengers Mansion, it’s up to the small but mighty Wasp to save her fellow Avengers in this action-packed tale.