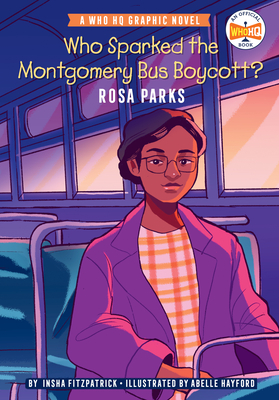 Who Sparked the Montgomery Bus Boycott?

Discover the story behind Rosa Parks and the Montgomery Bus Boycott in this compelling graphic novel -- written by Oh My Gods! author Insha Fitzpatrick and illustrated by #DrawingWhileBlack organizer Abelle Hayford.

Presenting Who HQ Graphic Novels: an exciting new addition to the #1 New York Times Best-Selling Who Was? series!

From refusing to give up her bus seat to a white passenger to sparking civil rights protests across America, explore how Rosa Parks's powerful act earned her the title "Mother of the Civil Rights Movement." A story of resistance, strength, and unwavering spirit, this graphic novel invites readers to immerse themselves in the life of the American Civil Rights leader -- brought to life by gripping narrative and vivid full-color illustrations that jump off the page.

"Rosa Parks’ lawsuit against the bus company that led her to be jailed for violating segregation laws and an inspiring amount of community organizing are vibrantly illuminated in Who Sparked the Montgomery Bus Boycott? ...All the [Who HQ Graphic Novels] showcase the passions and urgency or risks behind their headline-making events and humanize the people who made them possible." -- Booklist, starred review

Insha Fitzpatrick is an author of books and graphic novels, including Who Sparked the Montgomery Bus Boycott? Rosa Parks, Hanging with Vampires from Quirk Books, and the co-author of the series, Oh My Gods. She founded DIS/MEMBER, a genre website dedicated to all things horror, and when she’s not writing, she’s catching up on obscure horror films or consumed by reality tv.

Social media has played a huge role in Abelle's artistic growth, and they use their social media to share their art with others while also promoting other marginalized artists. In this effort, Abelle organized #DrawingwhileBlack, a viral hashtag to celebrate and promote Black artists around the world!
Loading...
or support indie stores by buying on