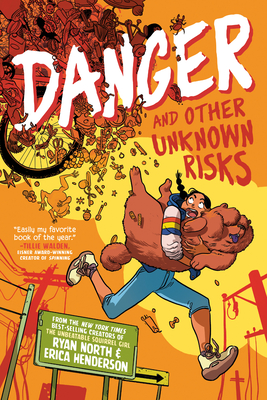 Danger and Other Unknown Risks

A twisty, spellbinding adventure about a girl and her dog who want to save the world, Danger and Other Unknown Risks is the highly anticipated YA graphic novel debut from Eisner Award-winning and New York Times bestselling creators Ryan North and Erica Henderson.

I'm gonna tell you a story, and I'm gonna ask that you let me finish before you say anything.

Here’s the deal—on midnight of January 1st, 2000, the world ended. But it wasn’t technology that killed it: It was magic. Now, years later, the Earth has transformed. Magic works (sort of). People are happy (sort of). But this new world isn’t stable, and unless Marguerite de Pruitt and her canine pal, Daisy, do something about it, it’ll tilt into deadly chaos. Good thing they’ve been training their whole lives for this and are destined to succeed. Or so they think.

Ryan North and Erica Henderson, the bestselling masterminds behind Unbeatable Squirrel Girl, serve up a graphic novel that is equally laugh-out-loud adventure and emotional gut punch. A story about the search for truth, chosen family, and rebirth, the journey of Marguerite and Daisy seeks to ask one vital question: How far are you willing to go to save the world?

Praise For Danger and Other Unknown Risks: A Graphic Novel…

“It’s been a while since a book sucked me in so completely. The adventure, mystery, humor, and darkness of it all left me floored. How many ways can I say that I loved it? Easily my favorite book of the year.” —Tillie Walden, Eisner Award–winning creator of Spinning

“Cute and fun and clever—you will want to read it more than once. Erica Henderson’s art is cartooning at its finest. A rollicking adventure that left me wanting more!” —Molly Knox Ostertag, New York Times best-selling creator of the Witch Boy Trilogy and The Girl from the Sea

“A stellar story with refreshing characters and riveting twists and turns, Danger and Other Unknown Risks will leave you spellbound!” —Sarah Andersen, New York Times best-selling creator of Fangs

“This comic has everything: brilliant artwork, a roller-coaster story, sharp comedy, heartfelt teen romance, and the best talking dog ever. I loved it so much!” —Faith Erin Hicks, New York Times best-selling illustrator of Pumpkinheads

Ryan North (he/him) is the writer responsible for Dinosaur Comics, the Eisner and Harvey award-winning Adventure Time comics, the #1 bestselling anthology series Machine of Death and the New York Times bestselling and Eisner Award-winning Unbeatable Squirrel Girl series for Marvel. He's adapted Kurt Vonnegut's Slaughterhouse-Five into a graphic novel, turned Shakespeare into NYT-bestselling choose-your-own-path books, and his book How to Invent Everything is nothing less than a complete cheat sheet for civilization. He lives in Toronto, where he once messed up walking his dog so badly it made the news.

Erica Henderson (she/her) is a multiple Eisner award-winning, New York Times bestselling artist best known for her iconic reboots of Marvel's The Unbeatable Squirrel Girl and Archie's Jughead. Erica's latest work, Dracula Motherf**ker from Image Comics, was the #1 selling graphic novel at the time of release and has been rapidly garnering critical acclaim. Henderson was born in New York, graduated from Rhode Island School of Design, and lives in Somerville, Massachusetts. She has not lived in New York for a decade but still has very strong opinions on bagels.
Loading...
or support indie stores by buying on