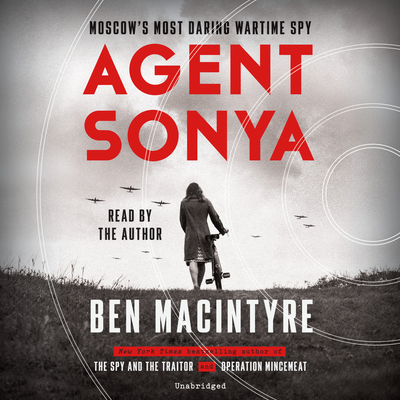 NEW YORK TIMES BESTSELLER • The “master storyteller” (San Francisco Chronicle) behind the New York Times bestseller The Spy and the Traitor uncovers the true story behind the Cold War’s most intrepid female spy.

In 1942, in a quiet village in the leafy English Cotswolds, a thin, elegant woman lived in a small cottage with her three children and her husband, who worked as a machinist nearby. Ursula Burton was friendly but reserved, and spoke English with a slight foreign accent. By all accounts, she seemed to be living a simple, unassuming life. Her neighbors in the village knew little about her.

They didn’t know that she was a high-ranking Soviet intelligence officer. They didn’t know that her husband was also a spy, or that she was running powerful agents across Europe. Behind the facade of her picturesque life, Burton was a dedicated Communist, a Soviet colonel, and a veteran agent, gathering the scientific secrets that would enable the Soviet Union to build the bomb.

This true-life spy story is a masterpiece about the woman code-named “Sonya.” Over the course of her career, she was hunted by the Chinese, the Japanese, the Nazis, MI5, MI6, and the FBI—and she evaded them all. Her story reflects the great ideological clash of the twentieth century—between Communism, Fascism, and Western democracy—and casts new light on the spy battles and shifting allegiances of our own times.

With unparalleled access to Sonya’s diaries and correspondence and never-before-seen information on her clandestine activities, Ben Macintyre has conjured a page-turning history of a legendary secret agent, a woman who influenced the course of the Cold War and helped plunge the world into a decades-long standoff between nuclear superpowers.

“[Ben] Macintyre at once exalts and subverts the myths of spy craft.”—The New Yorker

“Macintyre is fastidious about tradecraft details. . . . [He] has become the preeminent popular chronicler of British intelligence history because he understands the essence of the business.”—David Ignatius, The Washington Post

“Macintyre is a superb writer, with an eye for the telling detail as fine as any novelist’s.”—The Dallas Morning News

“Macintyre is one of the most gifted espionage writers around.”—Annie Jacobsen, author of Area 51 and Operation Paperclip

“Macintyre writes with the diligence and insight of a journalist, and the panache of a born storyteller.”—John Banville, The Guardian (UK)

“With Macintyre in charge, you’re virtually guaranteed a history book that reads like a spy novel.”—Richmond Times-Dispatch

“A scrupulous and insightful writer—a master historian.”—Alan Furst, author of Mission to Paris

“Macintyre is a master at leading the reader down some very tortuous paths while ensuring they never lose their bearings.”—Evening Standard (UK)

“Macintyre . . . has that enviable gift, the inability to write a dull sentence.”—The Spectator (UK)

Ben Macintyre is a writer-at-large for The Times (U.K.) and the bestselling author of The Spy and the Traitor, A Spy Among Friends, Double Cross, Operation Mincemeat, Agent Zigzag, and Rogue Heroes, among other books. Macintyre has also written and presented BBC documentaries of his work.
Loading...
or
Not Currently Available for Direct Purchase