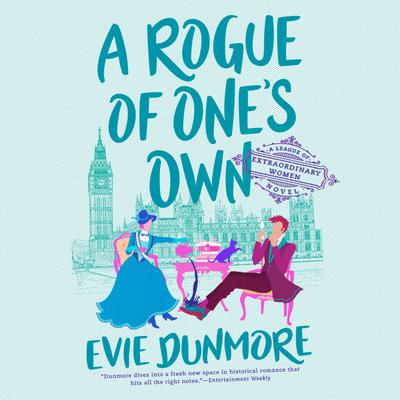 “Being excited about a follow-up to a debut novel can be fraught — will the second book live up to my expectations? A Rogue of One’s Own absolutely did! Evie Dunmore’s series (the first entry was Bringing Down the Duke) features a quartet of lively suffragettes and the men they fall in love with and bring over to The Cause. The characters are compelling and likable, the relationships solidly built. There are also some interesting tidbits for history buffs, like excerpts of actual letters written by women of the time.”
— Sandy Scott, The Galaxy Bookshop, Hardwick, VT
View the List

"Rich with subplot, historical detail and beautifully descriptive writing that keeps the pages turning until the delightfully unconventional happy ending."—NPR

An Apple Must Listen Audiobook for September!

A lady must have money and an army of her own if she is to win a revolution—but first, she must pit her wits against the wiles of an irresistible rogue bent on wrecking her plans…and her heart.

Lady Lucie is fuming. She and her band of Oxford suffragists have finally scraped together enough capital to control one of London’s major publishing houses, with one purpose: to use it in a coup against Parliament. But who could have predicted that the one person standing between her and success is her old nemesis and London’s undisputed lord of sin, Lord Ballentine? Or that he would be willing to hand over the reins for an outrageous price—a night in her bed.

Lucie tempts Tristan like no other woman, burning him up with her fierceness and determination every time they clash. But as their battle of wills and words fans the flames of long-smoldering devotion, the silver-tongued seducer runs the risk of becoming caught in his own snare.

As Lucie tries to out-maneuver Tristan in the boardroom and the bedchamber, she soon discovers there’s truth in what the poets say: all is fair in love and war…

Evie Dunmore is the acclaimed author of Bringing Down the Duke. Her League of Extraordinary Women series is inspired by her passion for romance, women pioneers, and all things Victorian. In her civilian life, she is a consultant with a M.Sc. in Diplomacy from Oxford. Evie lives in Berlin and pours her fascination with 19th century Britain into her writing. She is a member of the British Romantic Novelists' Association (RNA).