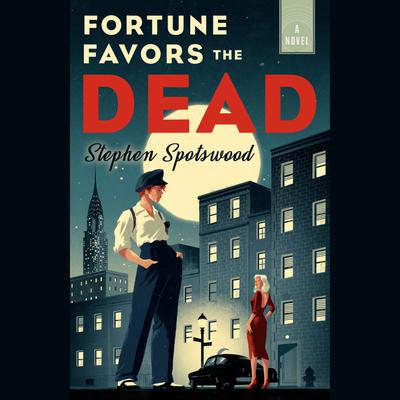 A Novel (A Pentecost and Parker Mystery)

“Not since Nero Wolfe and Archie Goodwin have I so enjoyed the page-turning yarn of a New York private detective and a wisecracking sidekick! Stephen Spotswood simultaneously nails the tone of classic detective stories and stands them on their head — because the brilliant gumshoe is Lillian Pentecost, a middle-aged woman with a disability, and her sidekick Willowjean ‘Will’ Parker, a gender-bending young circus performer with a sweet spot for the ladies. A delight from start to finish. Dare I hope this is the beginning of a series?”
— Jaye Lawrence, Content Bookstore, Northfield, MN
View the List

“Razor-sharp style, tons of flair, a snappy sense of humor, and all the most satisfying elements of a really good noir novel, plus plenty of original twists of its own.”—Tana French

A wildly charming and fast-paced mystery written with all the panache of the hardboiled classics, Fortune Favors the Dead introduces Pentecost and Parker, an audacious new detective duo for the ages.

It's 1942 and Willowjean "Will" Parker is a scrappy circus runaway whose knife-throwing skills have just saved the life of New York's best, and most unorthodox, private investigator, Lillian Pentecost. When the dapper detective summons Will a few days later, she doesn't expect to be offered a life-changing proposition: Lillian's multiple sclerosis means she can't keep up with her old case load alone, so she wants to hire Will to be her right-hand woman. In return, Will is to receive a salary, room and board, and training in Lillian's very particular art of investigation.

Three years later, Will and Lillian are on the Collins case: Abigail Collins was found bludgeoned to death with a crystal ball following a big, boozy Halloween party at her home—her body slumped in the same chair where her steel magnate husband shot himself the year before. With rumors flying that Abigail was bumped off by the vengeful spirit of her husband (who else could have gotten inside the locked room?), the family has tasked the detectives with finding answers where the police have failed.

But that's easier said than done in a case that involves messages from the dead, a seductive spiritualist, and Becca Collins—the beautiful daughter of the deceased, who Will quickly starts falling for. When Will and Becca's relationship dances beyond the professional, Will finds herself in dangerous territory, and discovers she may have become the murderer's next target.

STEPHEN SPOTSWOOD is an award-winning playwright, journalist, and educator who makes his home in Washington, DC. As a journalist, he has spent much of the last two decades writing about the aftermath of the wars in Iraq and Afghanistan and the struggles of wounded veterans. His dramatic work has been widely produced across the United States.