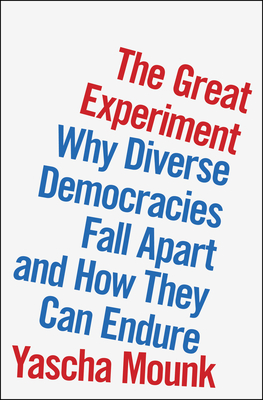 The Great Experiment is that rare book that offers both a profound understanding of an urgent problem and genuine hope for our human capacity to solve it. As Mounk contends, giving up on the prospects of building fair and thriving diverse democracies is simply not an option—and that is why we must strive to realize a more ambitious vision for the future of our societies.

Praise For The Great Experiment: Why Diverse Democracies Fall Apart and How They Can Endure…

“The fundamental argument of The Great Experiment is correct both morally and practically. Building diverse democracies is indeed hard. But, given the current composition of our societies, no alternative exists . . . A coherent and well-written call to arms.”—Martin Wolf, The Financial Times

“In this brave and necessary book, Yascha Mounk honestly confronts the challenges to democracy posed by diverse, multiethnic societies, while at the same time refusing to give in to fashionable pessimism. He argues that we can and should find ways to build common ground, using good-faith patriotism to build consensus. Anyone interested in the future of liberal democracy, in the US or anywhere else, should read this book.” —Anne Applebaum, staff writer for the Atlantic and Senior Fellow, SNF Agora Institute, Johns Hopkins University

“The Great Experiment confronts the intense challenges faced today by diverse societies in creating norms and institutions that allow their citizens to live peacefully with one another.  It moves from insightful analysis of our current crisis to practical suggestions on how to mitigate conflicts over race and identity—a blueprint for a more optimistic future.” —Dr. Francis Fukuyama, Director of Stanford's Ford Dorsey Master's in International Policy and author of The Demand for Dignity and the Politics of Resentment and The End of History and the Last Man

“A convincing, humane, and hopeful guide to the present and future by one of our foremost democratic thinkers.” —George Packer, author of The Unwinding and Last Best Hope

“Liberal democracies beat authoritarianism in the 20th century, but are growing more unstable in the 21st. In The Great Experiment, Yascha Mounk shows us our history, our psychology, our self-inflicted wounds, and our best hope for creating stable democracies that benefit from diversity. This magnificent book increases our odds of success.” —Jonathan Haidt, author of The Righteous Mind and professor at NYU-Stern School of Business

“[A] hopeful meditation on a multicultural world . . . Writing with insight, nuance, and sympathy to all sides.” —Publishers Weekly

“Can diverse democracies flourish? The Great Experiment is a bold and necessary counter-argument to nativists, populists and pessimists.” —Helen Lewis, Staff Writer, The Atlantic

“There is . . . very much to admire, above all the author’s outspoken and lucid defence of liberal values and his condemnation of those who advocate a politics built on group identities . . . . Mounk offers a coherent and well-written call to arms. His cause is right.” —The Financial Times

Yascha Mounk is a writer and academic known for his work on the rise of populism and the crisis of liberal democracy. Born in Germany to Polish parents, Mounk received his BA in history from Trinity College, University of Cambridge, and his PhD in government from Harvard University. He is now a Professor of the Practice of International Affairs at Johns Hopkins University and the founder of Persuasion. Mounk is also a contributing editor at The Atlantic and a senior fellow at the Council on Foreign Relations.
Loading...
or support indie stores by buying on