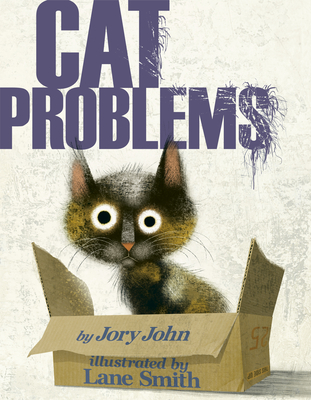 “I am so psyched that there’s a new Jory John and Lane Smith book! And it’s about cats and a day in their real lives! And a squirrel!”
— René Kirkpatrick, University Book Store, Seattle, WA
View the List

What could a pampered house cat possibly have to complain about? This latest collaboration from picture book superstars--and cat devotees--Lane Smith and Jory John brings with it a hilarious set of feline problems!

Just like most cats, this cat lives an extremely comfortable life. But he has his problems too!

The sun spot he's trying to bathe in won't stop moving. He keeps getting served dry food instead of wet. And don't even get him started on the vacuum--it's an absolute menace!--and the nosy neighbor squirrel that just can't seem to mind its own business. Will this cat ever find the silver lining?

Jory John and Lane Smith once again air their grievances in this must-have companion book to Penguin Problems and Giraffe Problems.

Jory John is a #1 New York Times bestselling author of many books for both children and adults. He is the author of Penguin Problems and Giraffe Problems, both illustrated by Lane Smith; The Bad Seed and The Good Egg, both illustrated by Pete Oswald; and Quit Calling Me a Monster! and I Will Chomp You!, both illustrated by Bob Shea, among many other books. Jory is a two-time E.B. White Read-Aloud Honor recipient and has won numerous state book awards for his writing. Jory lives in Oregon. You can find him at joryjohn.com or on Twitter @IamJoryJohn.

LANE SMITH has written and illustrated a bunch of stuff, including Grandpa Green, which was a Caldecott Honor Book; It's a Book, which has been translated into over twenty-five languages; and The Stinky Cheese Man. Four of his books have been New York Times Best Illustrated Children's Books of the Year. In 2012, the Eric Carle Museum named him an Honor Artist for "lifelong innovation in the field of children's books." In 2014, he received the Society of Illustrators Lifetime Achievement Award. Lane and book designer Molly Leach live in rural Connecticut. Visit him on the Web at lanesmithbooks.com.
Loading...
or support indie stores by buying on